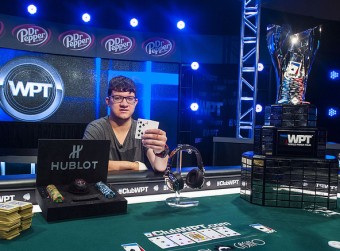 American pro Sam Panzica has won his second WPT title, taking down the biggest WPT Bay 101 Shooting Star field in history for $1,373,000. The 24-year-old from Michigan, who won the WPT bestbet Bounty Scramble in Jacksonville last October, has now achieved his first seven-figure score and is in the running to win Season XV WPT Player of the Year.

Next event: WPT Rolling Thunder. We are the tour’s Official Travel Partner so do check for hotel deals here.

“Now that I got a shot, it is kind of cool to think about,” Panzica said about his new position in the standings, which is just one min-cash away from taking the lead. Panzica is now heading to Sacramento to compete in the WPT Thunder Valley Main Event, and will be playing the Seminole Hard Rock Showdown in Florida in April.

The next WPT is  WPT Rolling Thunder. We are the tour’s Official Travel Partner so do check for hotel deals here.  The $3,500 WPT Rolling Thunder Main Event starts today. Harrison Gimbel won last year’s event, beating Mohsin Charania heads-up for his first WPT title. There were 409 players with Gimbel taking $275,112 for first. The Florida native was fourth in the same event two years ago.