One week to go to WSOP Main Event

There’s just a week to go before the World Series of Poker,the largest poker event on the planet – kicks off at the Rio in Las Vegas.

Don’t worry if you haven’t qualified on 888poker! MainEventTravel can help with all your Vegas accommodation needs; we have scores of hotels and gorgeous villasavailable for the whole of the World Series.

The 49thannual WSOP Main Eventstarts July 2 and features three starting days with a $10,000 buy-in. Players get a 50,000 starting stack and late registration is open until the start of Level 4 on Day 1c on July 4. The tournament runs through until July 14 when the 2018 WSOP Main Event world champion will be crowned.

The WSOPis the richest and longest-running poker series on the planet. In 2017, American Scott Blumstein took it down for $8,150,000 after beating a field of 7,221 players – the biggest field since 2010 and the third largest of all time. John Hesp, the Yorkshire grandad who become an overnight poker superstar during his sensational run at the WSOP, finished fourth for $2.6 million. 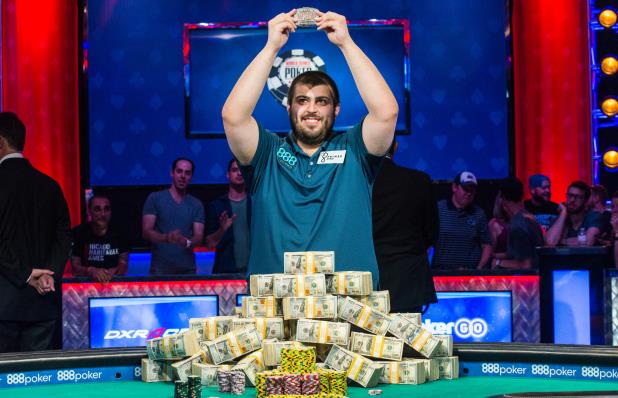 For the low-down on where to eat, drink and party in Las Vegas, don’t miss our new destination guide.

The 2018 WSOP schedulefeatures a dozen different tournaments beginning after the start of the Main Event including theLittle One for One Drop and the Big One for One Dropplus several new and exciting additions such as a $1,500 Bounty PLO event, a $5,000 two-day NL tourney and a two-day, $50,000 High Roller event. “The Closer” is a new $1,500 NL tournament with 15,000 starting chips and 30-minute levels.

The WSOP remains a global gaming phenomenon with participants attending from over 100 countries. In 2017, 120,995 entries competed for $231,010,874 in prize money, both marking 48-year highs for the annual extravaganza.