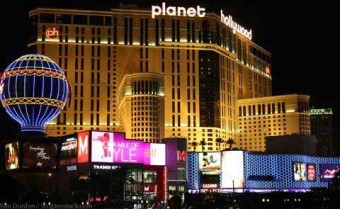 The very first major festival of this summer’s Vegas poker action is underway with the popular Planet Hollywood poker series kicking off May 25. For poker junkies, this gives you almost a full week of live poker in Vegas before the start of the WSOP on May 30.

At MainEventTravel, we have a mammoth 64 Vegas visits between us (and direct experience of more than 20 different hotels. Just get in touch and we will help you get the most of your Vegas trip, whatever your budget, planned schedule and any other requirements. Don't forget to take advantage of our personal on-site delivery service, just email lasvegas@maineventtravel.com.

Planet Hollywood Phamous!
The Planet Hollywood poker series starts Thursday and runs through until July 13, offering more than $7.5 million in guaranteed prize pools. The 2017 Phamous Poker Series Goliath opens with the Ultimate Goliath, a $600 buy-in event with three starting flights. There are a several other Goliath Stack events during the series, highlighted by the Goliath Milly ($1m guaranteed) on June 4, the $2m guaranteed Goliath 2017 Main Event on June 28 and The Grand Finale ($1 Million Guaranteed) on July 9.

Last year, Jan Schwippert won the $1,650 Goliath Phamous Poker Series Main Event for $300k after defeating a 2,332-entry field. There was an eight-way chop at the final table.

Big festivals in Vegas
In addition to the headline-grabbing World Series of Poker, there are a host of other big festivals are taking place throughout May, June and July, with buy-ins to suit players of all kinds.

These include the 2017 ARIA Poker Classic, the Venetian’s DeepStack Extravaganza III and the 2017 Phamous Poker Series Goliath at Planet Hollywood along with the Golden Nugget’s Grand Poker Series, Binion’s Poker Jam and the Wynn Summer Classic.

To sort out your dollars this summer, and take advantage of our personal on-site delivery service, just email lasvegas@maineventtravel.com.