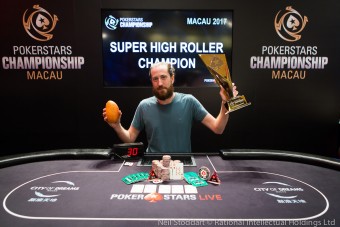 O'Dwyer will celebrate his birthday on Thursday and couldn't have given himself any better present than this seven figure result, along with another trophy for his extensive show-case. Today's payday puts O'Dwyer's live earnings well over $17.5 million and comes only two weeks after he won the PokerStars Championship Panama $10k High Roller for $240,45.

The PokerStars Championship is only halfway through its third stop but O'Dwyer has already accomplished two thirds of the golden treble: Day 1b of the Main Event is today.

An extraordinary talisman - a mango - helped O'Dwyer reach the Super High Roller victory. After taking down the tournament, O'Dwyer told the PokerStars Blog: "I think I've used up all the luck with the mango winning this tournament," before adding that he now intends to eat it.

Holz, who took HK$6,749,170 for his runner-up finish, has now moved to seventh place on the all-time money list, ahead of the legendary Phil Hellmuth. He's amassed over $21.7 million in live cashes.

Day 1a of the HK$42,400 PokerStars Championship Macau Main Event attracted 193 runners. Chinese player Zigao Yu is  the chip leader, bagging up 162,900. The 34-year-old is leading the pack of today's 117 survivors. Day 1b takes place today.