Max Silver makes it a WSOP to remember! 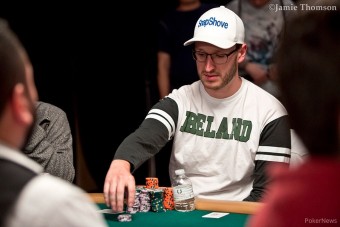 Only a few weeks after picking up his first ever WSOP gold bracelet, Max Silver is among the chip leaders in the $10k WSOP Main Event, with just 85 players left. Silver bagged up 8,665,000 putting him in third place in the overall chip counts.

The Dublin-based pro won the $3k Limit Hold’em 6-Handed event just 17 days ago for $172,645. He wrote this morning: “Made Day 6 of the main event for the second year in a row. Have more chips this time, roughly double average with 85 left. Thanks everyone for all the support and kind wishes. Means a lot.“

Silver has already cashed four times this summer while last year he made the money in a staggering ten events, including a 33rd place finish in the Main Event for $216,211. He told PokerNews: “I’d like to finally win a bracelet in no-limit hold’em, so maybe this is the one. It was actually a really smooth day. The start was a bit rough when I was kind of short, but from there it was no pots over two million and a lot of medium pots and I chipped up, which was lucky, no stress.”

All players left in this year’s WSOP are guaranteed at least $72,514 and the winner will get $8,150,000 – or a cool $10 million if they qualified for the event on 888poker. Everyone who reaches the final table is guaranteed at least $1 million. The current chip leader is Robin Hegele who finished the night with 9,990,000.

Surrey resident Paul Vas Nunes is also through to Day 6 and thriving on 6,780,000. He has close to $1.5m in live tournament winnings to date including a runner-up finish in the 2013 Estrellas Poker Tour Barcelona Main Event for €204,589. This is his first cash in the Main Event. Omaha specialist Richard Gryko returns for Day 6 with 5,835,000. He already has more than $1m in live tournament winnings to his name including an earlier cash at this year’s WSOP when he finished 255th in the massive 888poker Crazy Eights tournament.

Artan Dedusha, who is competing in his very first WSOP Main Event, was the Day 2c chip leader and is still in contention with 4,330,000. Dedusha has $118,186 in live tournament winnings to date and is now guaranteed a lifetime best cash; his previous best came a month ago when he took down the Grosvenor 25/25 Series in London for £25,241.

The WSOP will be going “on tour” soon after the Main Event ends - with International Circuit events planned in Argentina (August 2-8) and Rotterdam (August 25 to September 2). Stops in Campione, Brazil, Rozvadov, St Maarten, Paris, Sydney and Punta del Este in Uruguay are all on the schedule for this year with four more stops planned for 2018 including Marrakech and Tbilisi in Georgia.