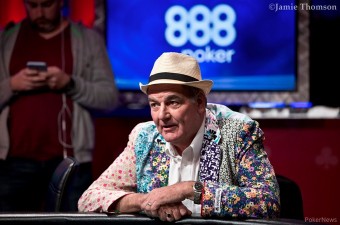 ohn Hesp,   a 64-year-old grandad from Bridlington, has made the final nine – and is second in chips – at the $10k WSOP Main Event World Championship.

The WSOP will be going “on tour” soon after the Main Event ends - with WSOP International Circuit events planned at the amazing Iguazu Falls in Argentina from August 2-8 and Rotterdam (August 25 to September 2).

John Hesp, who is being dubbed “the new Moneymaker”, is competing at the WSOP because it was on his “bucket list”. He will be back for Day 8 of the $10k World Series Main Event second in chips, with a massive 85,700,000 stack. The 64-year-old from the seaside town of Bridlington has never played anything like the WSOP in his life – but is now guaranteed at least $1 million after carving his way through a 7,221-entry field in the third largest WSOP ever held.

All Hesp’s previous cashes have come in a weekly £10 Sunday Rebuy tourneys held at his local casino - Napoleon’s in Hull. A month ago he even won one – for the princely sum of £785. That was the semi-retired grandad’s biggest cash to date - but he’s now on track to win the biggest and toughest poker tournament on the planet at the World Series of Poker. 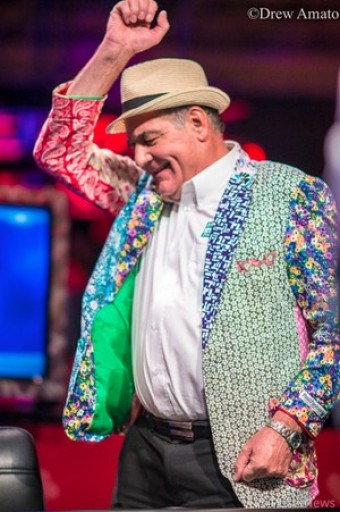 Even before his astonishing deep run, John had already been attracting a lot attention at the WSOP with his brightly-coloured patterned shirts and jackets – lent by a friend from home. Hesp, who is now semi-retired from the business he owns renting out caravan holiday homes, has just £1,745 in recorded cashes to date – all of which have come in Napoleon’s £10 Sunday Rebuys.

Hesp, who is apparently only being railed by his Uber driver, said: “It’s the most amazing experience of my life, a complete unbelievable surreal experience – which I would never have expected in my wildest dreams. I don’t have a poker history – I play a small game in my local casino, Napoleon’s in Hull, and I go there once, maybe twice a month, on a Sunday. But it’s only a £10 buy-in plus £2. I stepped it up to maybe two, three times a month before I came here to give myself a little bit of practice.

“It was on my bucket list wish to come here; I’ve had it on my mind for a couple of years now and I asked my lovely wife if I could come to play in the competition and she kindly said yes, even though she didn’t want me to go. She said “I hope you don’t get up to any mischief in Vegas, and I assured her I would not be having the time to get up to any mischief!”

British online pro Jack Sinclair, who rarely plays live and has just $13,500 in recorded cashes to his name, bagged up 20,200,000 and is 8th in chips when play resumes on Thursday. Sinclair, 26, who is based in Malta, only came to Vegas after being persuaded by his friends Philipp Gruissem and Anton Morgenstern. The three dubbed themselves “the Malta crew” on facebook.

Omaha specialist Richard Gryko from London bust the event in 18th place for $340,000, taking his live tournament winnings to over $1.3m. He already has a WSOP bracelet after winning the €3,250 Eight-Handed PLO event at the WSOP-E in Berlin in 2015.

Upcoming WSOP International Circuit events include: Argentina (August 2-8) and Rotterdam (August 25 to September 2). Stops in Campione, Brazil, Rozvadov, St Maarten, Paris, Sydney and Punta del Este in Uruguay are all on the schedule for this year with four more stops planned for 2018 including Marrakech and Tbilisi in Georgia.