The oldest NL poker tournament in Europe has just broken another record –  with the biggest prize pool in the event’s illustrious 26-year history. With 367 entries on Day 1a and at least 700 for Day 1b yesterday, there is now more than €1m up for grabs, more than double the event’s €500k guarantee.

Players can still buy in up to 2pm today, with final numbers – and the exact prize pool – to be confirmed later.

Registering right up to the wire will award a 30bb as a starting stack, and with such juicy prize money available here, it’s likely at least a couple of players will be entering – or – re-entering today. 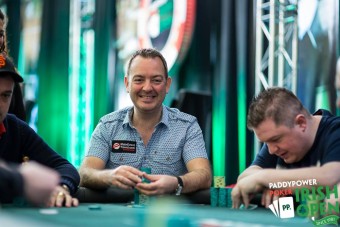 Last year Irish player Dan Wilson took down the Main Event for €150,000 after beating a giant field of 802 players generating a €801,500 prize pool. A €500,000 guarantee, legendary atmosphere – and popular Shuffleboard outside the main tournament area – make this a really unmissable event. The Irish Open is and one of the world’s most prestigious and lively poker festivals.