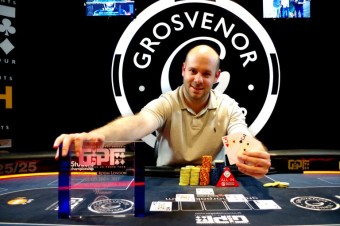 Well, it turns out not everyone is in Vegas! There were a staggering 449 entries to the GUKPT London £500 Main Event which was held over the weekend at The Poker Room above the Grosvenor Victoria Casino. It was a record for a GUKPT £500 event, and the turnout also beat the 2017 GUKPT London £1k season opener in January which attracted 435 entries.

The GUKPT will be back in less than four weeks’ time at Goliath 2017. As the Official Travel Partner for the GUKPT and Redtooth Poker Tour at the Goliath, we have secured several special offers on double or twin rooms at the DoubleTree by Hilton right at the Ricoh Arena. Check out our Special Offers page for full details - up to £30 off!

The MainEventTravel-sponsored all-in triangles saw plenty of action on the final day of GUKPT London which lasted a grueling 15 hours. Winner George Alexander said: “I can’t even remember a few hours ago to be honest, I’m so tired! I thought I’d go quite far but it’s just unbelievable to think it. It was a good laugh at the end, we were all laughing – but I don’t think they were laughing when I kept doubling up!”

George Alexander, who hails from Whitechapel, was short-stacked early on but finally took the lead at 1am he went all in against Eric Le Goff who bust soon after in fourth place. The final three – Alexander,  Andrew Christoforou and Guilio Mascolo – then cut a deal to flatten the payouts awarding £50k to the winner. After eliminating Mascolo in third place, Alexander held a massive chip lead and it was only a few hands before he bust Christoforou to win his first GUKPT title. It was by far his biggest cash to date and more than doubles his total live tournament winnings.

The £224,500 prize pool was shared by 44 players in all including Day 1a chip leader Tina Bandyle.

The GUKPT is the longest running poker tour in the UK and now in its 11th season. Remaining GUKPT events this  season include Goliath 2017 starting July 27, UKPT Leg 7 Leeds in September, GUKPT Leg 8 Luton in October plus GUKPT Leg 9 Blackpool and the GUKPT Grand Final London in November.