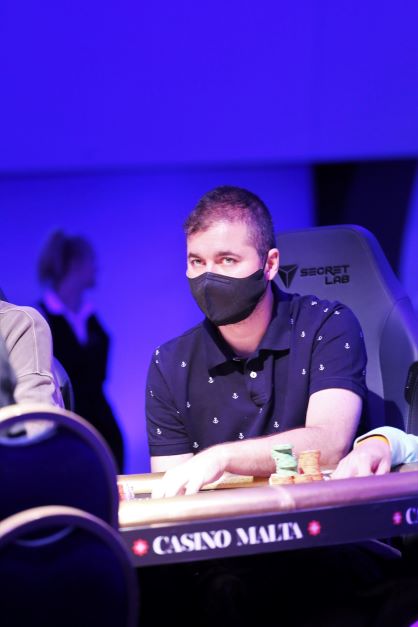 Our day is complete and we have a new Champion!

As you may have surmised -  Dimitrios Anastakis took the gold - deservedly so in many ways.

The final hand saw him get a tad fortunate, raise-calling

vs the shove with the superior

saw Dimitrios bury his head in his hands in joy -  a lucky result on this hand, but a deserved one in many ways, given the high-calibre manner in which he'd conducted himself over the whole tournament.

He'd carved out a deal earlier - Toivo Rinne (the runner-up) received €165,900 for 2nd - his thoughtful, aggressive play carrying him from a short stack coming into the final to 2nd in the results - 2nd place for  €165,900 a deseved result given how he played.

Dimitrios Anastasakis though is the 2022 BoM Champion and he utterly deserves it. He's put barely a foot wrong and made a number of high quality decisions coming into the day,

We saw Anastasakis play numerous hands throughout the tournament and whilst you can get lucky or not with those hands, we saw him play them with skill and panache.

Every player we spoke to, who had played with Anastasakis commented on what a fun guy he was to play with. The "fun" was not some slight on his skill level either - all acknowledged he could play cards, but his charisma and amiable character made him a fun guy to share the felt with.

We watched time and again as players busted to him - ready to fistbump their vanquisher - an excellent indication of someone conducting themselves well at the table.

Overall he deserved a deep run. Lucky, yes in many ways, Skillful though? Undoubtedly. It's been a week all of us can look back on with affection. There's been drama, passion and unbelievable prizes. Players have spilt their voices,  souls and bankrolls in a bit to get here and well they might.

Thanks for following - we've appreciated the support and we can't wait to meet you at the next one. A quick shout out to the tournament staff who've been as close to flawless as you can get.  There have been hundreds of thousands of hands dealt and the dealers and floor staff should get a special mention for their tireless work, making our lives easier and ensuring the players have had a trouble-free tournament. You guys rock.

So, sadly, that is it from us. Malta's been a wonderful trip and the Battle of Malta week-long festival has been a blast. Thank you for having us, well done to our winner and take care one and all till next time. 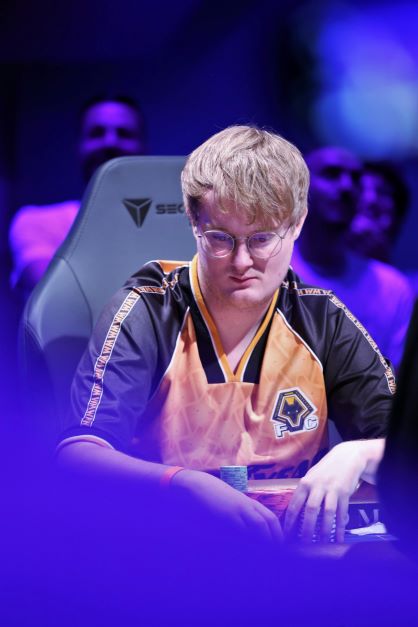 Will Jarman has proved a sticky, durable character at this final table and throughout the tournament. His decision making has been precise, considered and generally very accurate. A pure example of how young player should conduct themselves at the table.

We've watched him take time in breaks to assess the levels, chip stacks and general tournament milieu to ensure all the information was available to him before making a decision. This precision level of detail has served him well and his elimination was a function of bad luck rather than a misdecision,  as his

- something beyond his control.

Jarman though, despite having relatively few notable scores on his hendon mob, has shown he is a tough, capable NLHE player and on another day he could easily have taken down this tournament.

Today though, the above beat meant he finishes in 3rd place for a "mere" €125,200. It's an incredible score, amd Will should be proud but his demeanour suggests he will be around for a long time. This is just the beginning... 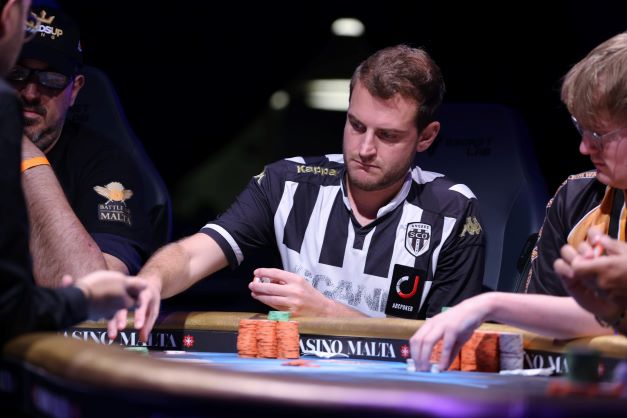 Sometimes, there's no avoiding the fates laid out to you. With stack sizes dwindling relative to the blinds Emmanuel Houssais and Anastasakis Dimitrios went to a flop of

for Houssais -  a strong hand on this board....but crucially

for Dimitrios for the stone cold nuts.

The pair went to war, understandably, but Houssais came out the worse for wear and left with just a few big blinds, he succumbed shortly afterward, collecting the impressive score of €72,540 for his performance. Houssais has proved a durable, competent and engaging character during this tournament. His rail have cheered him with great gusto - always a sign this is a charismatic player - and we've enjoyed his performance immensely.

Congratulations Emmanuel - we continue three-handed for the trophy... 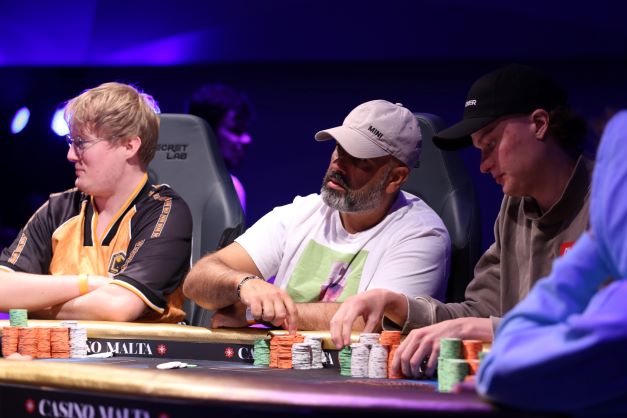 Carnage in the blinds as Zambonelli is dealt

in the small blind as simultaneously Rinne has

in the big blind.

"This is going all-in" the perspicacious David Lappin astutely observes and so it proves, Zambonelli raising, Rinne shoving and the Italian making the call.

All very fair and defensible poker - just an absolute cooler for Rinne.

It looked like the Finn was heading to the cash desk but then, the poker gods intervened, running the board out

to give Rinne a winning flush and a massive stack - he's now the chip leader with 35M!

He embraced his friend on the rail with such gusto it looked like  they might crush each other to death. Meanwhile a more mellow and sombre Zambonelli was down to just 4.7M.

"What a pot for RInner to take down....fantastic stuff," Lappin observes while his co-commentator sums up the crowd's emotions with the succinct phrase, "absolute scenes."

Zombonelli lasted a few more hands with his few big blinds before running a race with 99 v the J-Q of Demetrios and that was his day done. THe Italian's been a fun feature of the final table - can take pleasure in his performance & indeed the €52,420 that he gets for his 5th place finish. Well played! 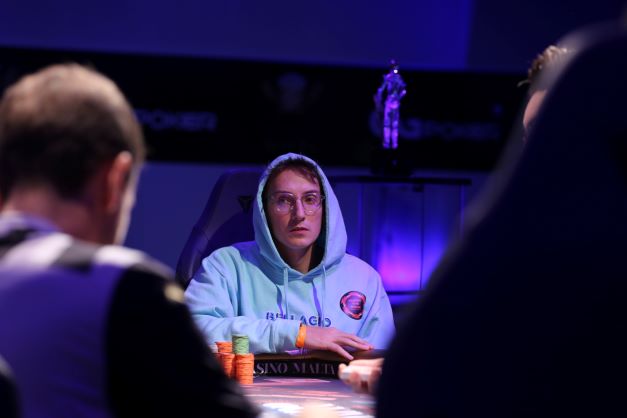 Gabriele Re just saw his attempts to become the Battle of Malta champion turn to dust in just a few hands.

The first saw him make a move on Dimitros, who popped it up to 1.7M on the button. Re with 12.6M thought this raise was suspicious and his

was good enough to re-steal with. He raised to 8M committing himself but back to Dimitros - he had an easy decision, holding

Re called his last 4.6M only to discover he was in pretty bad shape.

Still - any ace, three clubs and the pot could be his...

The flop didn't play nice though

brought him no succour and he was down to just a few big blinds. These went in shortly afterward and Re had found a very strong hand in pocket Queens!

His jam was only called by Zambonelli in the BB with

. He was set for a double but then the board fell

Incredibly Zambonelli cracked his queens and after a long, quiet passage of play with few eliminations, Re is first to fall in 6th place for €40,200.

Congratulations Gabriele, you played a blinding tournament, made very few mistakes and can be proud of your efforts here in Malta.

Zambonelli now holds a slight lead - but the stacks are so evenly matched that this could change in just a moment.

Barone's been a joy to cover - funny, amiable and inventive but he is out in 7th as his A-Q fails to beat DImitros pocket tens.

Congratulations on the €33,220 - we continur 6-handed with Dimitros now holding a sizable lead... 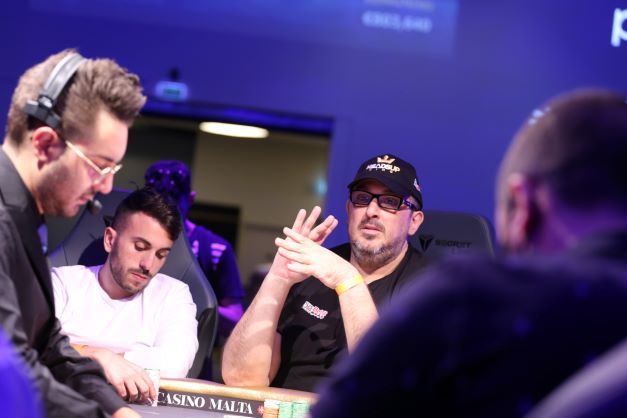 Here's the chips as we move close to the first break of the day.

Barone is the short stack but it's testament to the structure that he still has some room for manoeuvre with an 18BB stack. Dimitrios with a healthy lead over Will Jarman in 2nd. 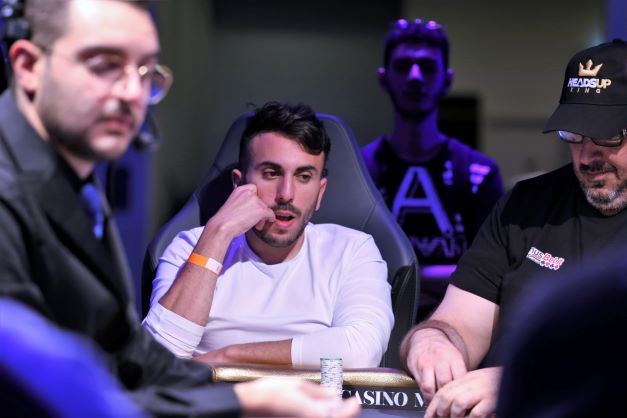 was likely in pretty good shape so made a small re-raise to 1.3M to isolate - Jarman folded and the pair were heads up for the pot.

Bad flop for Azulay as it comes

(huge cheer from Houssais boisterous rail) and the

on the turn just made matters worse, leaving Azulay just one nine in then deck to hit. The 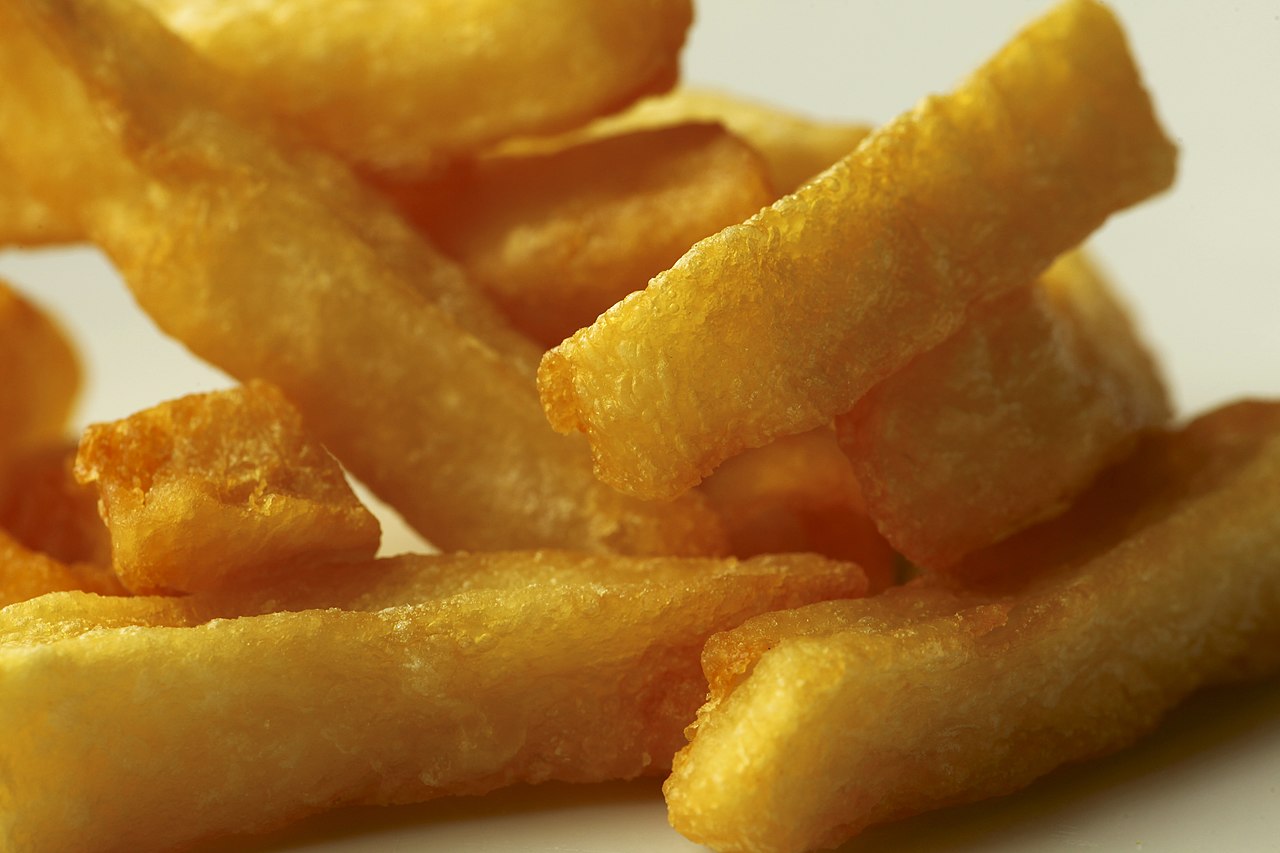 Here's how they stand - Dimitrios Anastasakis cruising into the lead while Azulay is well in the danger zone with 6BB. He recently played out a hand with pocket fours versus Will Jarman's pocket queens - Jarman drawing the max from the hand when Azulay decided to make a slightly strange 1M bet on the river.

That hand leaves the player standings as below: 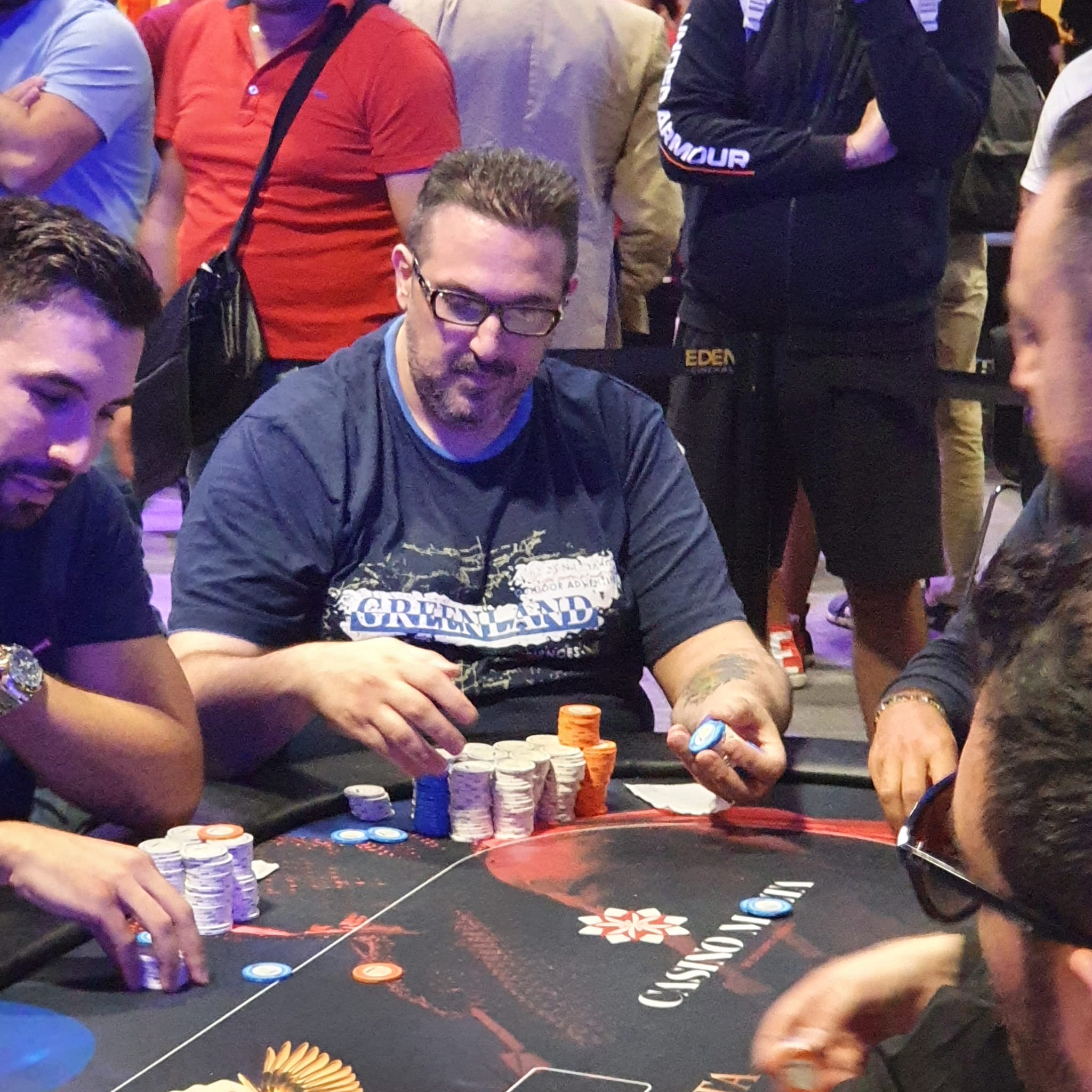 There's been a relatively quiet period since Nanos was KO'd.

Finally though a huge hand brews. From the player perspective, it's exciting as Anastakis raises to 600k, Barone (pictured) 3-bets and Anastakis shoves, Barone calls his stack off!

The excitement quickly died down - Barone laughing as both players showed pocket queens. No four flush and the two of them chop the pot. As you were!

We've lost the first player of the day and it's Konstantinos Nanos who is the player to go. Unfortunately our stream cut out just prior to the elimination so we don't have details of the hand!

We'll get this info and update this shortly but for now Nanos is off to the cash desk to collect his  €25,120 - congratulations on making the final and a decent score.

The rest of the players continue 8-handed and have a little more room at the table...

Toivo Rinne just made the first significant move of the day - Christian Zambonelli raising to 600 from the hijack, only for Rinne to "stick it in his eye" - to use some slightly dated poker parlance - and jam for 3.2M.

Tough decision for Zambonelli with

The board was intriguing - falling

completed Rinne's flush - much to his delight. The

on the river was irrelevant and Rinne takes a big step forward, doubling to 7.1M while Zambonelli is down to 12M... 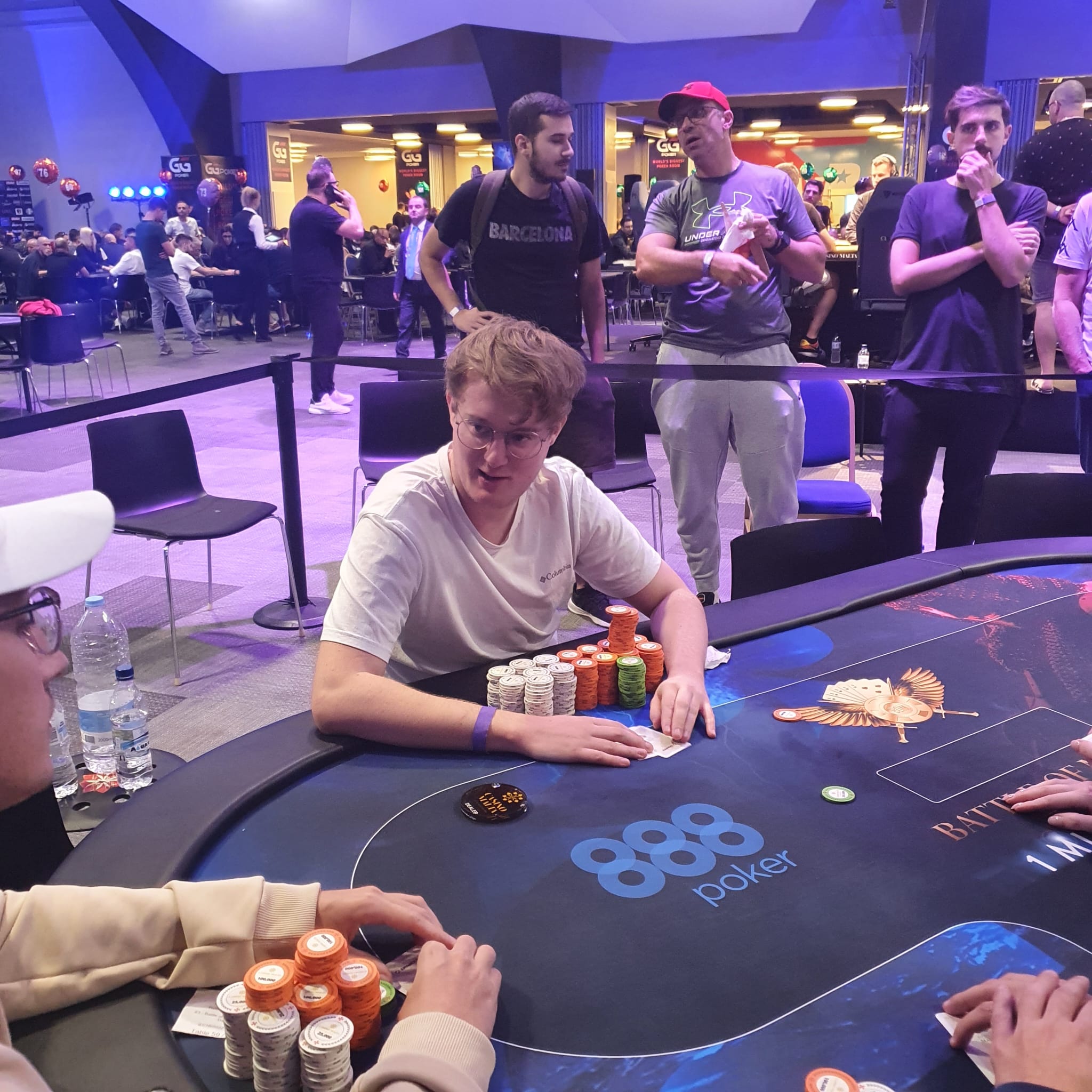 The guarantee is now a vestige of the past as the 4,000+ runners & rebuys ensured we smashed that to smithereens long ago. The total prize pool in fact has reached €2,084,160 which has left the remaining 9 players fighting it out for a very attractive top prize of €302,000.

Here are the players who'll be duking it out for the title today, WIll Jarman holding a slender lead over Dimitrios Anastasakis - those two well clear of the field, though if they take anything for granted, they will find the poker gods can be fickle masters!

We're about to start and the players wil line up as below:

Here are the payouts the players can expect: We're moments from the start. Remember you can catch all the action from the stream which you can find by clicking here. Thomas Kremser has just introduced the players, cards are in the air. Shuffle Up & Deal!