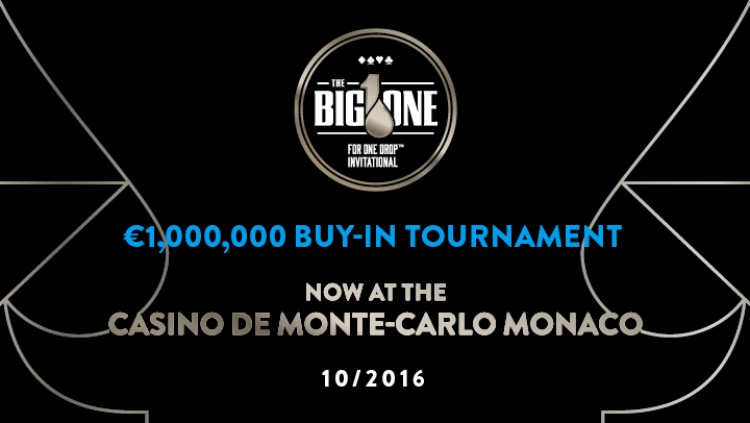 35+ Players Signed up for One Drop in Monte Carlo

More than 35 players are already signed up for this week’s €1 million buy-in “Big One for One Drop Invitational” in Monte Carlo. The event, the biggest buy-in tournament ever staged, is part of the first Monte Carlo One Drop Extravaganza which will be raising funds for Guy Laliberté’s One Drop charity dedicated to providing sustainable access to safe water.

Event organisers have yet to reveal the names of the 35 confirmed players but British businessman Paul Newey has already tweeted he’s competing – and selling up to 5% of his action. Dan Shak and Laliberté himself will also be taking part.

The Monte Carlo One Drop Extravaganza, which runs October 13-17 at the stunning Casino de Monte-Carlo in Monaco, comprises eight tourneys in total as well as high stakes cash games including thrilling a €1 million game.

Looking at the schedule for the five-day event, it might be worth pitching up for the food alone. Players taking part are being offered a “full VIP experience” including cuisine from HEART Ibiza at the Opening Soireé on October 12 and a Closing Party at famed restaurant Buddha Bar on October 17.

The main Big One for One Drop tournament starts at noon on Friday (October 14) and, if 35 players do take part, then the prize pool already stands at more than €31 million – with close to €4 million of that going to the charity. It’s also a re-entry tourney so Laliberté is hoping the prize pool will soar once play is under way.

This is the first time that the One Drop has been restricted to non-pros– a move which has been welcomed by some and criticized by others. The first Big One for One Drop was held in 2012 and was won by Antonio Esfandiari for a monster $18.3 million payday. With 48 runners, it raised more than $5.33 million for the charity.