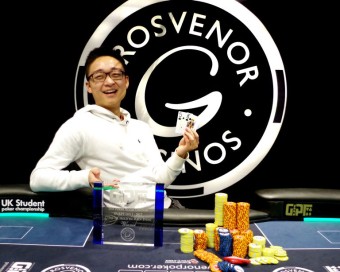 Michael Zhang has beaten leading Spanish pro Javier Gomez Zapatero to take down the record-breaking GUKPT London Main Event for a staggering £113,000. Zhang started heads-up against Gomez with a big chip lead -  and it didn’t take him long to seize victory and the biggest live cash of his poker career.

Some 20 minutes into play, Gomez, who won WPT Prague in 2015, made a move and was caught out by Zhang who had rivered a flush. Gomez took £74,000 for his runner-up finish.

The debut event of GUKPT's 2017 tour, held at The Poker Room above London’s iconic Grosvenor Victoria Casino, attracted a total of 435 entries, making it the biggest Main Event in GUKPT history. The tour now heads north for GUKPT Manchester  which runs February 26 to March 5. The £1,100 main event comes with a £200,000 guarantee plus there will be loads of side events and live satellites. The Main Event starts March 2, with the £220 Mini Main Event running February 26-28 with a £20,000 guarantee.

2017 is the GUKPT’s 11th consecutive season and promises to provide another record breaking year with a packed schedule and staggering £1,800,000 in Main and Mini Main guarantees. There will be nine legs in total this year before the GUKPT Grand Final takes place at the Vic in London in November.