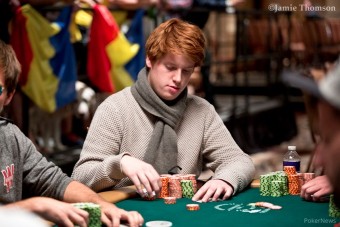 There were 8,120 entries in all, with 23-year-old Lodge winning $344,888. He now has more than $700k in live tournament winnings. Lodge first took up poker while at boarding school in Sussex and carried on playing while studying Economics at Exeter University. Soon after graduating he won the Sky Poker 6-Max at Dusk Till Dawn for £60,000 and decided to turn pro. It was the young Brit’s fourth cash of this year’s World Series and tenth WSOP cash overall. He

The Crazy Eights was won by Romania's Alexandru Papazian who beat German pro Kilian Kramer heads-up to take the $888,888 first prize. It was Papazian’s first WSOP bracelet and the victory takes him right to the top of his country’s all-time money list.

Good luck to Londoner Elior Sion who has made the final six of the WSOP $50k Players Championship after finishing ninth in the same event last year. Last year’s score netted him $116,571, the biggest cash of his career, but he’s guaranteed an even bigger cash this year. Daniel Negreanu is the current chip leader with Sion in fourth place. There were 100 entries overall creating a $4.8m prize pool. Sion bubbled the event in 2014.

UK veteran Barny Boatman and 888poker Ambassador Chris Moorman are leading the UK/Ireland cashes table so far – with both having headed to the payouts desk seven times. Chris Moorman, the most decorated tournament player in online poker history, won his first World Series of Poker gold bracelet early on in the Series, topping a field of 959 players in the $3k NL 6-Handed tournament for $498,682. Boatman’s biggest cash to date was 16th in the $5k NL for $16,889. So far Brits and Irish players have won more than $5.6m at this year’s Series.