There was a sizeable rail for last night’s final table at Unibet UK Poker Tour Brighton as three women made the final table – and it looked highly possible that the tour would be crowning its first female champion. 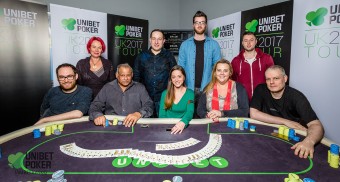 Sadly partypoker VIP Manager Charlie Godwin was the first of the women to bust, finishing in 8th place. Brighton-based American Deborah ‘Debs the Destroyer” Worley-Roberts and Renata Jack were still thriving though - with Worley-Roberts frequently holding the lead. She was finally ousted in third place, taking £6,140 for her efforts.

It was then just down to Renata Jack. She lives just outside Brighton in Poynings and has travelled the world playing poker – but with Unibet qualifier Mateusz Krzyzewski holding a 4:1 chip lead at the start of the heads-up, it was not to be. Her runner-up finish rewarded her with a career-best cash of £9,260.

Krzyzewski, who won his package to Brighton via a €25 online tournament, became the new Unibet UK Poker Tour Brighton champion – winning the coveted trophy, £14,090 prize and a package to the next Unibet Open. The 31-year-old Pole also won the Unibet qualifier Last Longer contest to gain a second Unibet Open package.

This is the second Unibet UK Poker Tour that Krzyzewski has cashed, having finished 20th in last year's Manchester leg. Last night’s £14,090 prize was by far his largest live cash to date, as his current live winnings stand at $1,850.

Krzyzewski, a full-time software developer, plays poker online for fun as well as aiming to win packages, so he can travel to live poker tournaments with his friends. They include Lukasz Kurcaba, who won the Nottingham leg of the Unibet UK Poker Tour last year.

Since the tour began in Brighton last year, there have been six UK Poker Tour champions – and three have been qualifiers.

The first stop of the 2017 tour was held in the spacious poker room at the Rendezvous Casino in Brighton Marina and generated £52,200 prize pool, a tour record. There were 261 entries to the £220 Main Event with 30 places paid. Among those to cash was Unibet Ambassador David Vanderheyden, top German pro Manig Loeser who now lives just a stone’s throw from the Rendezvous in Brighton Marina and Jac Arama.

There are five Unibet UK Poker Tour stops this year with each boasting a £220 buy-in, £40,000 guarantee Main Event. Players get a 25,000 starting stack and it’s 40 minute blind levels with one re-entry per starting day up to a maximum of £880. You also have the option of both Day 1a and 1b and taking your biggest stack through to the Final Day.

As well as the cash prize, each Unibet UK Poker Tour champion will get a custom trophy and a package worth €2,000 for a Unibet Open event. A €2,000 Unibet Open package will also go the online qualifier who lasts longest in each event.

After Brighton, the tour is heading to Glasgow (June 2-4), Nottingham (August 25-27), Brighton again in October and Manchester December 8-10.