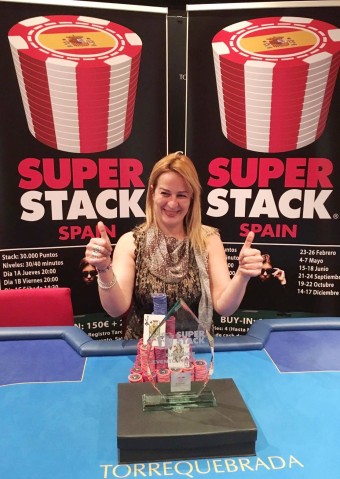 With a last name that means “warrior”, Maria Del Mar Guerrero certainly put her fighting skills to good use over the weekend to take down the epic Super Stack Spain event at Casino Torrequebrada near Malaga.

Among those who took part was Super Stack-sponsored November Niner Fernando Pons. Known as “Nando” to his friends, Pons finished ninth out of 6,737 players in the WSOP 2016 Main Event, netting $1 million after qualifying online in a €30 satellite.

Maria, a recreational player, is only the second woman ever to win a Super Stack event; the first was  Catherine Ivgi who won Super Stack UK in 2015 for £14,200.  The Super Stack team said: "Maria is a lovely lady and we're very happy for her. After several years and over 100 tournaments, it’s nice to have another lady win!!"

There is more Super Stack excitement coming up soon with Super Stack Gibraltar starting March 16. MainEventTravel is Super Stack’s Official Travel partner and has secured a fabulous deal for players to stay onboard the luxury 5 star Sunborn Super Yacht Hotel, Resort and Casino with two-, three- or four-night packages that include the £170 tournament buy-in. Two nights plus buy-in is only €480!

Super Stack will be back in Spain with April’s event in Murcia and Casino Torrequebrada in May, June, September, October and December.

All Super Stack events feature the popular Super Stack® structure with a 30,000 starting stack and 30/40 minute blind levels. Four re-entries are allowed per flight with late registration open for the first 3½ hours.