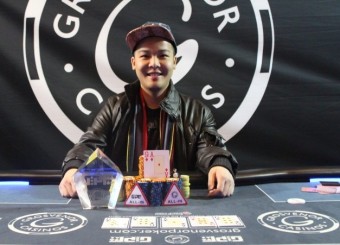 UK poker stars of the future will be vying for top prizes at the Grosvenor UK Student Poker Championship from April 18-23.

The event, which is being held this year at the Ricoh Arena in Coventry, is the biggest student poker festival nationwide and has been growing year-on-year since its creation. Last year Joseph Kwok staged a remarkable comeback on the final table – and beat a 965-strong field overall - to take down the Main Event for £5,000. He cut a three-way deal with Leicester student Isaac Carlisle, who was runner-up, and third-placed Jack Armorgie. Philip Bain took down the £250 High Roller for £3,230.

Easter Beast
There’s a ton of fun to be had at Grosvenor Casinos right across the UK with this year’s £110 buy-in Easter Beast running April 10-17. The event, which forms part of the Grosvenor UK Poker Tour (and has the same structure), features a single £20k guarantee tournament for each of eight regions across the UK.

Day 1s take place on various days in each region and players who make it to Day 2 then head to a single destination for the final in their region. One re-entry is allowed per day and players get a generous a 20,000 starting stack. The Day 2s are taking place in the following venues: Didsbury (Northwest), Leeds (Yorkshire), Luton (Southeast), Portsmouth (South coast), Newcastle (northeast), Dundee (Scotland), Coventry (Midlands) and Swansea (Wales).