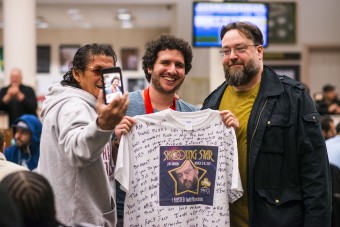 APPT Macau champion Eddy Sabat is chip leader at the end of Day 1a of the $7,500 WPT Bay 101 Shooting Star Main Event with 265,600, followed by top Spanish pro Sergio Aido who has 242,500. Sabat bust Shooting Star Todd Brunson on Day 1a yesterday and was thrilled to collect $10k Brunson’s bounty along with, more importantly, his t-shirt. Brunson has a history of signing hilarious and profane messages on his bounty t-shirts, and this year he did not disappoint. “The t-shirt is the best,” Sabat said. “He drew a picture of me! See? It says ‘little bitch’.”

The $3,500 WPT Rolling Thunder Main Event starts March 11. The dates for the overall poker festival, which is being held at Thunder Valley Casino Resort, are March 8-15. Harrison Gimbel won last year’s event, beating Mohsin Charania heads-up for his first WPT title. There were 409 players with Gimbel taking $275,112 for first. The Florida native was fourth in the same event two years ago.

Since 2004, the World Poker Tour has had a late winter swing through the state of California, starting with L.A. Poker Classic in Los Angeles followed closely by the Bay 101. When WPT Rolling Thunder was added to the tour in 2014, the WPT formalized this segment of the tour as the “WPT California Swing,” offering a Grand Prize to the player who accumulates the most WPT Cali Swing points.