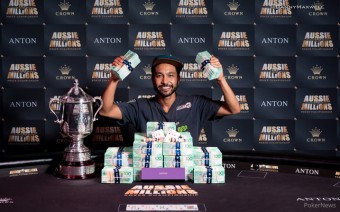 Pub poker fan Shurane Vijayaram has taken down the 2017 Aussie Millions Main Event for AUD$1.6 million after a stunning victory against some of the best players in the world. Vijayaram won his seat in a $130 satellite at Crown Casino just over a week ago after friends from the pub suggested he have a go.

Vijayaram, who was competing in his home city of Melbourne, beat British pro Ben Heath heads-up to win the event – and notch up his first recorded cash on the Hendon Mob. This is the first time he has reached the money in any major event he's played.