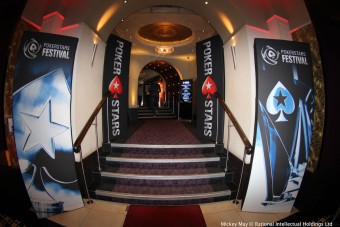 Following an epic PCA in the Bahamas, PokerStars LIVE is back in the UK this coming week with PokerStars Festival London. The event starts tomorrow at The Hippodrome Casino with 10 tournaments on the schedule, including the £500,000 guaranteed PokerStars Festival Main Event (£990 buy-in, running January 24-28).

Three PokerStars Players Championship Platinum Passes, worth $30,000 each, will be awarded during the festival - the first to be presented on UK soil.

The event is the first PokerStars Festival stop of the year with many more yet to be confirmed across Europe. The Hippodrome, which is slap bang in the middle of London's West End, is a spectacular converted theatre, with great bars, fab restaurant and playing area. Other highlights on the seven-day schedule include the £170 Super Deep Stack running January 22-24, the £2k PokerStars Festival High Roller (January 23-24) and the £330 London Cup from January 27-28.

Team PokerStars Pro Jake Cody said: "I'm really looking forward to the festival in London. It’s not often I get to roll out of my own bed to go and play a big PokerStars event with friends,” said Cody. “Players can expect a great atmosphere and schedule. Plus, there are three free $30,000 PSPC tickets to be won throughout the event!”

The Platinum Pass packages, which will be awarded to the winners of the PokerStars Festival London Main Event, High Roller and London Cup events, give the winners entry to the $25k PokerStars Players No Limit Hold’em Championship (PSPC) at the PCA next January. The PSPC is already being heralded as one of the most exciting tournaments to ever take place with PokerStars giving away more than 300 Platinum Passes to cover the $25,000 buy-in, accommodation, and $2,000 towards travel.