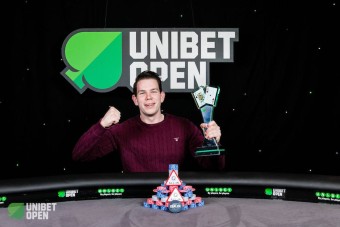 Andreas Wiborg got every student’s dream on Sunday – a massive cash windfall when he took down the Unibet Open London 2018 Main Event for £56,807. The 22-year-old from Bergen only came to London because one of his friends had won a package for the event but on Friday he decided he might as well buy in to the tournament himself.

Bergen beat a tough field of 349 entries to take down the £990 event, the first of Unibet Open’s 2018 tour. It was biggest live cash to date but his resume also includes a runner-up finish at Unibet UK Glasgow two years ago.

The next Unibet event is next month with Unibet UK Brighton. The event is being held at the Rendezvous Casino with a £40,000 guaranteed Main Event running March 23-25. Brighton is only an hour from London and we have tons of hotels so come enjoy some top-notch poker and a fantastic weekend break.

Wiborg is now the current front-runner for Unibet Player of the Year. The contest was launched during Unibet Open London and will involve players from both live and online events throughout 2018. Huge prizes are on offer including €2,000 Unibet Open packages as well as tournament tickets and cash prizes. A spectacular Battle of the Champion’s play-off will take place early next year to determine the overall Unibet Player of the Year. Live players will be able to rack up points by entering any Unibet Open Main Event or Unibet UK Poker Tour Main Event as well as the Unibet Romanian Poker Series and Unibet Belgian Poker Championship. As well as points for taking part, there will be additional points for everyone who cashes and further points based on performance.

Unibet Open London took place at The Poker Room, above the iconic Grosvenor Victoria Casino in Edgware Road from February 22- 25. It was the tour’s seventh visit to the UK capital and attracted 349 entries in total; 47 players got paid from the £314,100 prize pool.