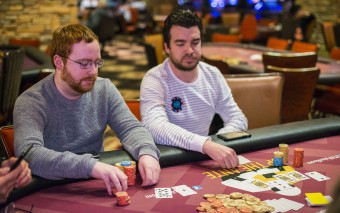 WPT Caribbean champion Niall Farrell has a substantial lead at WPT Rolling Thunder after eliminating his friend and fellow WPT champion Chris Moorman in a massive pot late on Day 2. With both Brits all in on the river, Farrell turned over a nut straight to win the pot, bust Moorman, and take the lead.

UK-based German pro Rainer Kempe is out but could still win the WPT California Swing after good performances at WPT L.A. Poker Classic and WPT Bay 101. Six players could still pass him but they will all need to finish at least seventh or better including EPT Berlin champion Kevin MacPhee, British pro Charlie Carrel and Mohsin Charania, who was runner-up last year and would need to win or come second again.

In the Hublot WPT Player of the Year race, WPT Bay 101winner Sam Panzica is now just one min-cash away from passing Benjamin Zamani to take down the POY race. He’ll have to pin his hopes on a good result at Seminole Hard Rock at the end of the month.