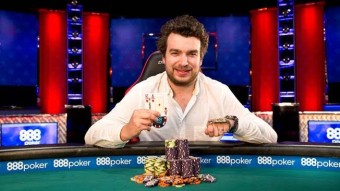 888poker Ambassador Chris Moorman, the most decorated tournament player in online poker history, has won his first WSOP bracelet. His victory is perfect timing with 888poker sponsoring the WSOP for the third year in a row – and MainEventTravel providing all the accommodation for 888poker qualifiers.

The win brought Moorman’s lifetime live earnings up to more than $5.1 million, which moved him into eighth on England’s all-time money list. He has won more than $14 million playing online.

Moorman said: “It's kind of surreal. Any time you win live, it's like it's a lot more 'real'. (Online) the money goes into your account. You don't see the money in front of you; you don't have anyone celebrating. I don't know – it's just a great feeling when you win [live].”

Cheering Moorman on – at one of the most boisterous rails in WSOP history – were friends and fellow pros Niall Farrell, Maria Ho, and Marvin Rettenmaier, to name just a few. Moorman had to contend with a tough final table lineup including Steve Sung and Michael “Gags” Gagliano, both WSOP bracelet winners. They ended up finishing fourth and third respectively, which set up a heads-up match between Moorman and Brazilian Bernardo Da Silveira Dias, who was making his first-ever WSOP final table. Fellow Brit Max Silver finished sixth in the event for $73,510.

Moorman’s other big score, and what was his breakout in the live realm, came back in 2014 when he bested a field of 534 runners to win the World Poker Tour LA Poker Classic for $1,015,460.