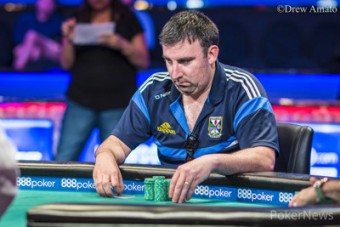 Congrats to Ireland’s Mark Reilly who has scored a career-best cash – and narrowly missed winning his first WSOP bracelet – after finishing third in the $3k PLO event.

Reilly, who hails from Cavan, won $149,258 taking his live tournament winnings to date to nearly $500k. Reilly was chip leader when the final table began but had to settle for third place when he got his chips in on the flop with a combo draw against eventual winner Louie Calvo's pair of jacks and got no help from the deck on the turn or river. Calvo won $362,185 with runner-up Rudolp Sawa taking $223,812.

Reilly’s previous best score before now was a third place in the UKIPT Dublin Main Event last year for €75,230. Two years ago, he had a deep run in the $1,500 NL event, finishing 26th for $13,442. MainEventTravel CEO Fraser MacIntyre is also a PLO fan and had deep run in the £1k Pot Limit Omaha two weeks ago, finishing 50th for $3k.

Pot Limit Omaha action at the Rio is now winding down; the $10k PLO 8-Handed Championship is down to 15 players and the prestigious $25k PLO 8-Handed High Roller kicks off on July 5.