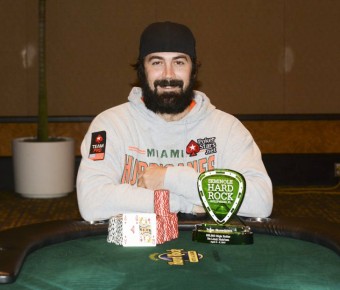 A lot of big money was being won at the Seminole Hard Rock Hotel & Casino yesterday with Jason Mercier taking down the  WPT Seminole Hard Rock Poker $25k High Roller for $749,600 and Tony Sinishtaj winning the Showdown Championship for $661,283.

The High Roller was considered the toughest event of the series, with 116 entries generating a $2.9m prize pool.

Some three hours earlier before Mercier’s victory, Tony Sinishtaj hadachieved a lifetime best cash when he won the Showdown Championship for $661,283. Sinishtaj, who hails from Flushing, New York, has now more than doubled his live tournament winnings and also won himself a seat in tomorrow’s WPT Tournament of Champions. He beat a tough final table which included Dan Colman and Rob Mizrachi for his biggest ever live cash. There were 1,207 entries overall creating a $3,862,400 prize pool.

There have been a total of 102 events on the Seminole schedule. The final of the WPT Seminole Hard Rock Finale is today and the second ever WPT Tournament of Champions starts April 7.