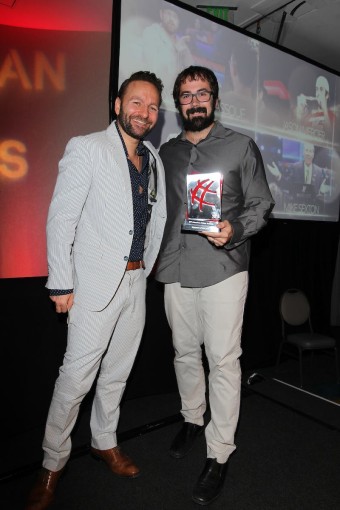 Jason Mercier won Moment of the Year at the American Poker Awards last night in recognition of his spectacular heater during last summer’s World Series. He won two WSOP bracelets and had a runner-up place in a single week to secure the GPI WSOP Player of the Year award - and now an American Poker Award. During his time in Vegas, Mercier also proposed to his girlfriend Natasha Barbour and the couple have since married.

Mercier, who has amassed more than £17m since winning EPT Sanremo in 2008, said: "It was really cool to win Moment of the Year. I'm not sure I have ever had or will ever have another week like I experienced during the WSOP last summer. Getting first, second and then first in three consecutive championship events definitely was an amazing feeling. It's rare to catch such a heater, and I'm just grateful and fortunate that I was able to catch fire like that."

The Jury Prize went to WPT Executive Tour Director Matt Savage – a member of MainEventTravel’s “Ask the TD” panel. Ari Engel won Tournament Performance of the Year for his victory in the Aussie Millions Main Event while Jason “jcarverpoker” Somerville won Twitch Streamer of the Year for his Run It Up live stream.  Media Person of the Year was EPTLive host Joe Stapleton while Lance Bradley won Poker Media Content of the Year for his piece "Bob, Charlie and a life changing WSOP Main Event Journey" for PocketFives.