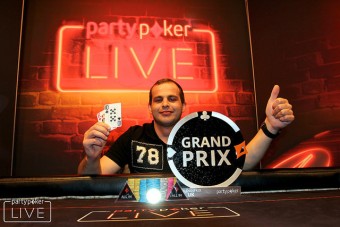 Congrats to Robertas Gordonas for winning the partypoker Grand Prix UK Main Event for £150,000 after buying in for just £220.

More partypoker LIVE events are on the schedule after Grand Prix UK including a return visit to Sochi for partypoker Millions Russia (Sept 1-11) and the eagerly-awaited Caribbean Poker Party in November with a total $5,000,000 guaranteed prize pool.

The event started with 5,143 runners across a plethora of Day 1s, both online and live at Dusk Till Dawn, through a number of Day 2s, until the field was whittled down to just 53 players coming back for Day 3.

Gordonas, who lives in the UK but hails from Lithuania, beat Britain’s Richard King heads-up after starting the final table – and the heads-up – with the lead. The £150k first prize was by far his biggest cash.

"He fully deserved the win, he was the best player on the day," King said of his opponent as the two men congratulated each other on a fine heads-up battle in the moments after the tournament ended. Both King and Gordonas have tickets to the Caribbean Poker Party in November and the UK PC Main Event.