The eagerly-awaited GUKPT Manchester £1,100 buy-in Main Event starts tomorrow with a monster £200,000 guarantee. MainEventTravel still has some great deals on hotels near the casino. 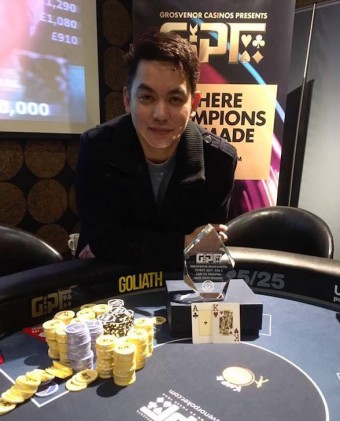 The tournament is part of an eight-day festival at Grosvenor Casino Manchester. The £220 Mini Main Event attracted 269 entries, creating a prize pool nearly three times the £20k guarantee. There were 27 players who got a share of the £53,800 total. Kam Lee won the event for £9,110 after cutting a four-way deal with runner-up Les Kearney, Joe McKeown (3rd) and Osman Mustanoglu (4th).

Last year Reyaaz Mulla won the Main Event for a career-best cash of £58,300. He cut a heads-up deal with EPT Barcelona champion Tom Middleton before seizing victory and the GUKPT trophy. There were 232 players last year creating a £232,000 prize pool.

2017 is the GUKPT’s 11th consecutive season and promises to provide another record breaking year with a packed schedule and £1.8 million in Main and Mini Main guarantees. There will be nine legs in total this year before the GUKPT Grand Final takes place at The Poker Room above the Grosvenor Victoria in London in November.

Michael Zhang won the debut GUKPT of 2017 tour earlier this month for a staggering £113,000. The GUKPT London Main Event was the biggest in the tour’s history and has set a high standard for the rest of the year after attracting a whopping 435 entries.