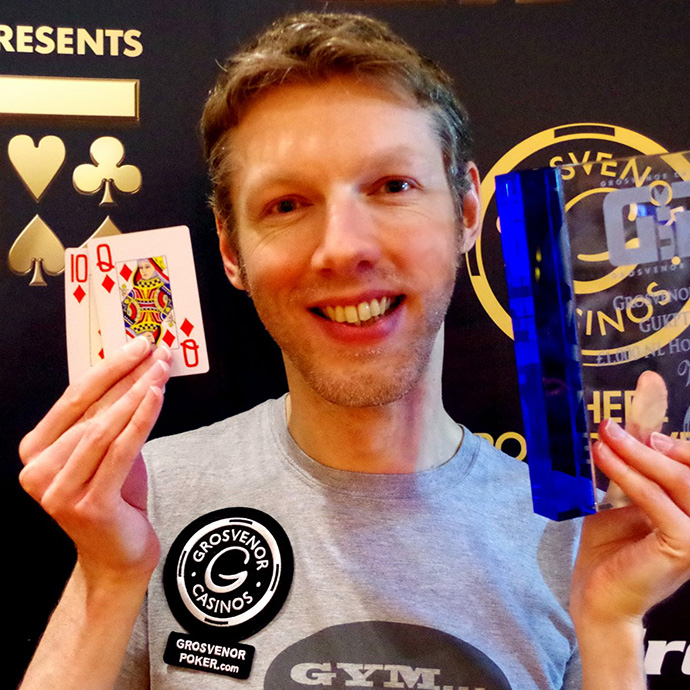 Hills will be seeking a second victory in Manchester after winning the £1,100 buy-in GUKPT Main Event there in 2017. The affable Lancastrian is on a mission to travel and enjoy poker in as many different countries as possible. He was joint second in  the 2018 Hendon Mob’s flag rankings for the number of countries cashed in and is already off to a great start in 2019 with trips to the cashier in San Marino, Germany and the Ukraine along with Romania where he took down the Unibet Open Sinaia High Roller just a week ago for €27,040.

He said: “Winning GUKPT Manchester in 2017 - off the back of the 'Passport' promotion where I freerolled every GUKPT 2017 Main Event - was an absolute game changer for me after following the tour for years. I've since gone on to grind live poker and had by far the best two years of my poker career. I’ve secured a full sponsorship with Grosvenor and gone on to cash for just over $500,000 in live tourneys since my Manchester win! I also finished in the money in more live tourneys than any other player from the UK/Ireland on 2 consecutive years so very happy with what I've achieved so far!“

Manchester follows a smash hit season opener in London which took place in January. The event was an outstanding start to the tour’s 13th season with a record 467 entries for the Main Event – creating a staggering £467,000 prize pool – and a huge Mini Main which attracted 395 entries. The winner opted to remain anonymous after beating Greek pro Alexios Zervo to a £100,000 first prize at the Poker Room above the Victoria Casino. Poker superstars Martin Jacobson, Ludovioc Geilich and Patrick Leonard all enjoyed deep runs in the stellar event.

Players can qualify for the Manchester Main Event online at Grosvenor Poker with direct satellites taking place every Tuesday and Sunday. There are 11 events on the GUKPT Manchester schedule including the 75/75 Bounty, Omaha 4/5/6 and numerous satellites.

Following GUKPT Manchester, the GUKPT heads to Edinburgh with a week-long festival at the end of March and GUKPT Luton - Leg 4 in June. The GUKPT is Grosvenor Poker’s flagship tour and the longest-running poker tour in the UK. The 2019 GUKPT will comprise nine legs each hosting a flagship Main Event with buy-ins ranging from £500+60 to £2,500+150 and guarantees of between £100,000 and £500,000.