British pro Adam Owen scored a unique double at GUKPT Leeds this weekend, taking down both the Main Event – for £41,950 – and the Mini Main. It’s the first time any player has ever won both tournaments at the same event. Owen’s total haul for GUKPT Leeds came to well over £45,000 and brings his total live tournament winnings to more than $3 million. 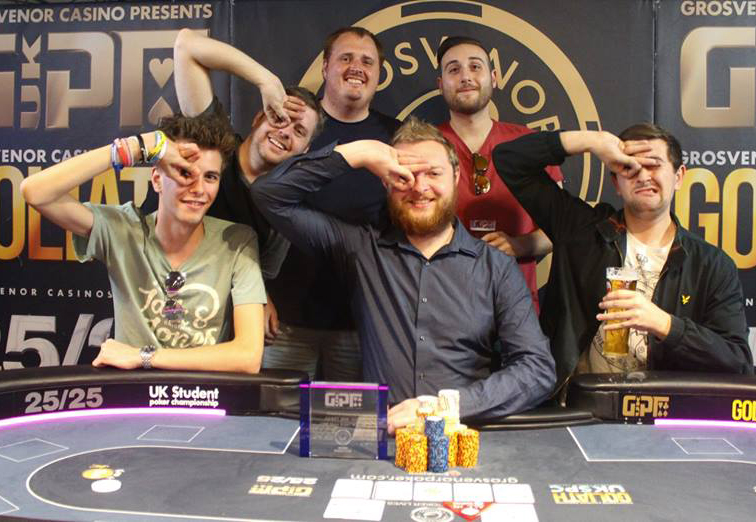 Don’t miss the next GUKPT in Luton. The event runs October 7-14 with a £200,000 guaranteed Main Event. In November, the GUKPT hits Blackpool for one of the most popular stops of the year; this year’s GUKPT Grand Final is November 18-25 at the Poker Room above the Grosvenor Victoria Casino.

It is only two years since Owen competed at the Grosvenor UK Student Poker Championship he finished fourth for £540. Since then he has travelled the world playing poker and won some life-changing sums, including a staggering €1.3m in Barcelona earlier this year.

With 302 entries, this year’s GUKPT Leeds was just a few runners shy of breaking the event record. The runner up was Grosvenor Passport winner David Gee, a 33-year-old engineer from Lancashire, who also made last year’s final table. Gee topped the Grosvenor Championship of Online Poker leaderboard to win his £12,000 GUKPT passport which includes entry and accommodation for every GUKPT Main Event of 2018. His winnings from this have now already passed the £30,000 mark with several events still to play, including the GUKPT Grand Final in London at the end of the year.

UK poker legend Ali Mallu ended another whirlwind GUKPT run finishing third. This was his 195th recorded cash in a UK poker tournament in an illustrious career spanning over 16 years.

The next GUKPT festival takes place in Luton from 7th to the 14th of October. The GUKPT Main Event is a £1,000 + £110 buy in and carries a guaranteed prize pool of £200,000. As always, Grosvenor Casinos provides plenty of opportunities for players to win their entry to each GUKPT main event for a fraction of the cost by playing on of the ever popular satellite tournaments, both in the host club and online at GrosvenorPoker.com