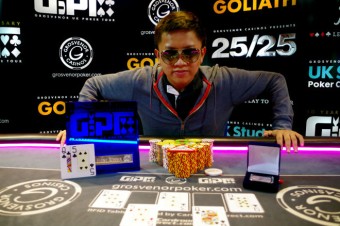 Following the huge success of the last GUKPT in Manchester, GUKPT Edinburgh is next on the schedule, with a week-long festival starting Sunday (March 26). The £100,000 guarantee, £550 buy-in Main Event kicks off March 30. The last GUKPT Edinburgh was won by Tommy Le (pictured) who topped a field of 184 for £25,000.

Among those competing will be GUKPT Passport winner Andy “LogJam” Hills. He took down the last GUKPT in Manchester for £46,987. He was already a GUKPT and 25/25 Series regular but, thanks to winning the 2016 promotion, is now free rolling every leg of the 2017 GUKPT tour. Sensationally, he managed to convert his Passport prize in to a £46,987 victory on only the second leg of the 2017 tour. GUKPT Manchester attracted 268 entries creating a monster prize pool of £268,000 - the biggest field the Manchester stop has had in years.