Fraser through to another Day 2! WSOP update 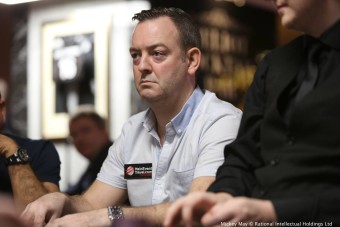 MainEventTravel CEO Fraser MacIntyre has made it through to another Day 2 at the WSOP, with 15,300 in Event 37, the $1k NL

MainEventTravel is the Official Travel Partner for all 888poker’s WSOP qualifiers with fantastic hotel packages for hundreds of players in Vegas.

There were 2,020 entries in the $1k and 239 are through to Day 2. Fraser wrote: "Made it through to another day 2. I'm short stacked, but anything can happen. Back tomorrow to spin it up." The current chip leader is American Chad Eveslage on 197,300 followed by British pro Louis Salter on 192k. Fraser has already cashed twice at this year’s WSOP: he finished 237th out of a staggering 7,761 entries in the Millionaire Maker for $6,043 and finished 50th in the £1k Pot Limit Omaha for a further $3k.

Fraser is hoping to beat his WSOP record in 2017; last year he cashed for over $40k including a deep run in the Main Event, finishing 301st for $32,130. He said: "I'm feeling really good about my game right now, so hopefully there are some really deep runs to come during the series.".

With 35 out of 74 events already in the bag, American Doug Polk is top of the earnings board at this year’s World Series. He has already won $3,687,240 after taking down the High Roller for One Drop event. He is followed by French legend Bertrand "ElkY" Grospellier who was runner-up in the same event. David Bach is this year’s first two-time bracelet winner: he took down the the $1k Dealers Choice 6-Handed event two weeks ago for $119k and then went on to win the $10k HORSE Championship for $383k.

As well as the $10k Main Event starting July 8, other key events this year include the $888 Crazy Eights with four starts flights beginning July 1. Last year’s debut event attracted 6,761 and this year 888Poker is guaranteeing a minimum $888,888 first-place for the tournament

888poker players who win a $3k Crazy Eights package will stay at the Rio All-Suite Hotel & Casino from July 1- 4 and receive $1,200 travel expenses plus entry into the $888 Crazy Eights Tournament & more. All accommodation will be booked with MainEventTravel.

In 2015, 888poker sent 128 players to the WSOP Main Event, eventually won by the 888poker-sponsored Joe McKeehen. In 2016, 888poker sent more than 250 players including November Niners Fernando Pons and Griffin Benger, who qualified for the WSOP Main Event via €30 and €160 satellites respectively. Out of 6,737 players, Pons finished ninth for $1 million while Benger took seventh for $1,250,190. Last year’s Main Event was won by

In 2017, 888poker is hoping to break records with the number of qualifiers that head off to Vegas after winning satellites online – and MainEventTravel will be helping those players every step of the way! If a qualifier wins, 888poker is guaranteeing them a $10m first prize.

The charity Little One for One Drop will return again in 2017 as a post-Main Event special with three start flights on July 11, 12 and 13.