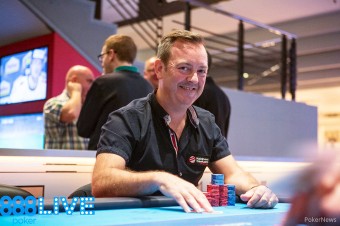 MainEventTravel is 888Live’s Official Travel Partner for the festival offering great hotel deals in Barcelona. And if you fancy some sun, there’s still lots of time to get out to the 888Live Make It Big Festival €500,000 guaranteed Main Event. Day 1b today at 6pm; 1c on Saturday at 3pm.

MacIntyre bust five players during yesterday’s play and was joint chip leader as the final table began, but once Pop assumed the lead, he never let go. Pop now has two 888Live titles to his name; as well as last night’s €40,000 victory, he also won the debut 888Live Rozvadov Main Event in February for €80,000.

MacIntyre, who started running MainEventTravel nearly three years ago, snagged €28,000 for his runner-up finish. He said: “Obviously I'm delighted to do well, but especially so at one of our partner's events! The 888Live Make It Big Festival is already a tremendous success and MainEventTravel is thrilled to be part of it. There were a staggering 720 entries for the opening event and the High Roller got 70 entries, nearly three times the €50k guarantee and we’re looking forward to an absolutely jam-packed Main Event.”

MacIntyre, who hails from Ayr in Scotland, has more than $600k in live poker winnings to date including a tremendous runner-up finish at EPT Madrid in 2012. He’s currently ranked #4 on Scotland’s all-time money list; fellow Scot Gordon Huntly, who comes from Edinburgh, was sixth in the High Roller for €8,000. MacIntyre is planning to take today off and play 1c of the 888Live Make It Big Festival tomorrow.