Fast and furious for Day 2 of Goliath!

This year’s Grosvenor Poker Goliath Main Event has broken records yet again with well over 6,300 entries, creating a giant prize pool of £638,500. There were 908 players back for Day 2 including Grosvenor Ambassadors Joe Beevers, Joe Kimber and Katie Swift. There have already been more than 150 bust-outs in the first hour.

A record breaking Day 1G field of 1544 entries yesterday was the biggest Day one in Goliath history. Bogdan-Marius Aprodu led the charge at the start of Day 2 after bagging up 745,500 on Day 1A. 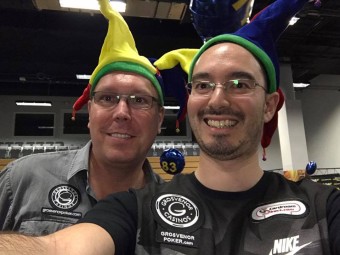 Redtooth’s biggest ever tournament on UK soil took place as part of the record-breaking Goliath poker festival. The £75 buy-in event was Redtooth Poker’s first ever with a £25,000 guarantee, narrowly missed after the tournament attracted 306 entries.

After a tense and exciting 13 hours of poker, Chris Appleby toppled all who attended to take away the £5,500 first prize after a deal was struck four-handed. The final table of 10 lasted around 3 hours as a nice 20,000 starting stack saw over 6,000,000 chips in play!

After our hugely successful debut £25,000 guarantee event, the Redtooth Tag Team event kicked off last Sunday, with both winners getting a VEGAS100 seat for the first time ever!

There were 94 teams in all for the £60 event, creating a total prize pool of over £5,000!! Congrats to Dawn Burnip and Liam Hamilton.

If you’re not a member of the UK’s biggest pub poker league, sign up! Over 1,000 pubs take part in the Redtooth Poker league which started ten years ago. Following Redtooth’s Goliath appearance, the tour now heads to Bournemouth in August, followed by a fantastic event at Casino Malta from September 15-18. The remaining stops are Dundee, Liverpool and Nottingham this year plus Cardiff in January 2018 and London next February.  Tickets exclusively available on MainEventTravel.com.