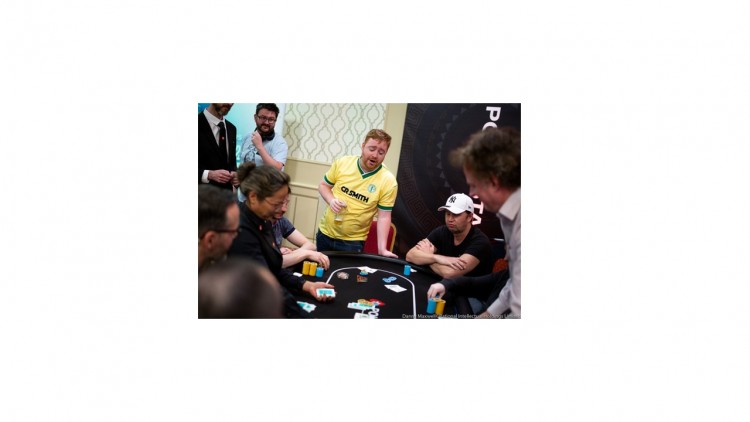 Scottish pro Niall Farrell has netted his first UKIPT trophy after taking down the €1,100 Dublin Main Event on Sunday for €54,940.

Farrell is known as something of a party animal – and Dublin is definitely a party town – so it was no surprise to find out that the 34-year-old says he nearly didn’t play the Main Event because he had such a monster hangover.

He said: “It was good fun but I had a couple too many Guinnesses on Day 1 and then I was really struggling for the next three days. I’m trying to cut down but it’s tough in Dublin!! If you see the Main Event winner pic, I look like I haven’t slept for two days – which I hadn’t.”

Farrell, who also finished third in the UKIPT Dublin High Roller for €14,910, beat a 278-entry field to take down the Main Event. He went into the six-handed final table fifth in chips but staged something of a miracle comeback to reach heads-up against Leon Campbell. Campbell snagged €34,290 for his runner-up finish.

It was Niall’s first UKIPT trophy but not his first UKIPT “victory”. He also won a UKIPT Edinburgh £50 one-table turbo back in 2010 – his first-ever live cash.

Niall, who has won $6.4 million at live tournaments and nearly $4 million more online, is also a Triple Crown winner, one of only nine players in the world (and the only Scot) who each have a WSOP, WPT and EPT title. He secured his Triple Crown in 2017 after taking down the €25k WSOPE High Roller in Rozvadov for €745,287. He won EPT Malta in 2015 and the WPT partypoker Caribbean Main Event in 2016. His biggest online cashes include two PokerStars SCOOP titles, a final table finish at the MILLIONS Online in 2019 and winning the FTOPS Main Event in 2014.

Farrell is now back home in Dumfries for a week – with his partner Edita and their 2½-year-old son Ruairi – before heading out to Vegas. He has already had a phenomenal year at live events after getting back into the swing of things after lockdown. He said: “I haven’t really been playing anywhere over the last couple of years. I was mostly home and locked in – it was pretty good timing for us with a baby! But I went out to Vegas last November and started getting back into it. I was really rusty but I’m definitely having some kind of daft run this year.”

In Vegas, he will be playing some 30-40 No Limit events with buy-ins of $25k and below. He added: “If it all goes well, I’ll play some higher stake events towards the end; if it doesn’t go well, I’ll fly home early with my tail between my legs.”

Farrell, who has been a full-time pro since graduating in law from Dumfries University, is also soon to be the subject of a fly-on-the-wall BBC documentary about poker. He said: “They’ve been following me around for months now and are also coming out to Vegas. I think we will be finished filming by the end of August but I’m not sure when it’s going to air. It’s just things like me chatting with Ludo (Ludovic Geilich) and other players in Prague – and moaning about the price of everything in Monte Carlo! I hope there’s not too much of me drinking as my Mum will be watching it.”

PokerStars will be back in Dublin with Road to PSPC Dublin in July for one of 13 Road to PSPC events being staged this year in the run-up to next January’s PokerStars Players NL Hold’em Championship in the Bahamas. The winner of the €400 Dublin tourney will receive a $30k Platinum Pass which includes the $25k PSPC buy-in, six nights’ luxury hotel accommodation and $1,900 in cash towards expenses.