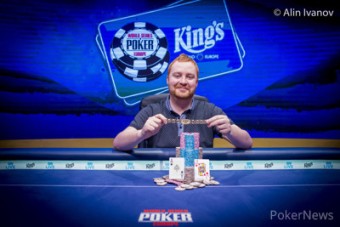 Farrell was up against a tough field in the €25k High Roller in Rozvadov but after a long, hard-fought, five-hour final table – and without a sip of beer - he managed to win his first WSOP bracelet and € 745,287, the largest live cash of his career.

The affable Glaswegian pro has come close to WSOP victory before: in 2016, he was runner-up in the $1,500 Shootout event and he then made the final table of the $111,111 High Roller for One Drop a week later.

He said: “I feel fantastic. It’s so nice to finally get over the line especially after losing heads-up twice. Especially in a field like this, it’s pretty prestigious.”  Farrell beat November Niner Benjamin Pollak heads-up to seize victory. The Frenchman was third at this year’s WSOP Main Event in July.

Farrell already has World Poker Tour  and European Poker Tour titles to his name. He won EPT Malta in  2015 for  €534,330  and the partypoker WPT Caribbean last November for $335,000. With $4.4m in total live tournament winnings, he is already ranked Scotland's No. 1 player and is now the first Scot to win a WSOP gold bracelet.

“Everyone is very good,” Farrell said about the strong field. “Poker players always think they’re the best player in the field, but to be honest I would say I’m in the top third, because it’s quite tough. A lot of it was just good fortune but I’m really proud of how I played. In the end I got on the right side of some of the all-ins and won!”