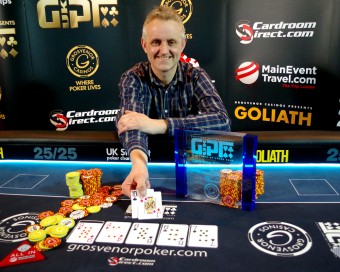 Scottish player Paul Green has won GUKPT Edinburgh on home ground for £17,500 after cutting a four-way deal. Green, a regular in Edinburgh events, now has over $100k in live tournament winnings.

MainEventTravel.com now sponsors GUKPT’s all-in triangles so look out for them on next stop: the £100k guarantee GUKPT Walsall from April 23-30 with GUKPT Reading from May 21-28. The Grosvenor UK Student Poker Championship runs April 18-23 and the Easter Beast is taking place across the nation from April 12-17.

There were 227 entries in total, smashing the guarantee with a prize pool of £113,500. The field included 76 players who qualified in satellites at Grosvenor cardrooms across Scotland. Locals and GUKPT regulars made up the rest of the field in the UK’s premier tour.

There were 20 players through to the final day yesterday, whittled down to nine in just 2.5 hours of play. Some two hours after the elimination of John McGlynn in fifth place, the final four cut a deal. Paul Green, Mark Frith & Ian Swan locked up £15,000 while former runner-up Colin Wu, who had a massive chip lead, secured £24,000. Once Wu bust in fourth, the remaining three chopped £6,000 and played it out for £500, the trophy and prestigious GUKPT Edinburgh title.

Green, whose previous best cash was for £7,000 in Glasgow last October, won for a career-best cash and first major trophy. Sin Melin was the last woman standing, and finished ninth for £2,390.