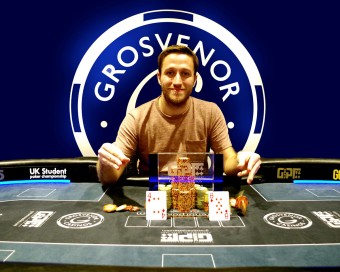 John Eames has won GUKPT Luton for £68,350 and his first GUKPT title after a dominating performance on yesterday’s final table.

The next GUKPT is GUKPT Blackpool from November 5-12 so bag your accommodation early! We are the tour’s Official Travel Partner and can help you find great hotels near the tournament venue.

Luton was Eames’s third final table at a GUKPT after he finished fifth in Brighton in 2010 (for £9,600) and eighth in Walsall three years ago for £2,700. It was also his biggest cash on the tour and takes his live tournament winnings to nearly $2.2 million. He has cashes going back ten years including big wins in Vegas, Vienna, Prague and Barcelona.

There were 239 entries for Leg 8 of this year’s GUKPT tour creating a £239,000 prize pool. Grosvenor Ambassador Will Kassouf, who was ninth at the recent GUKPT Leeds stop, had another deep run, finishing 21st £2,150. Three spots later, fellow Ambassador Joe Beevers was eliminated, finishing 18th for £2,390.

It’s now just three weeks until the penultimate event of the 2017 GUKPT tour in Blackpool. Leg 9 takes place November 5-12 and features a £200k guarantee Main Event. There will also be a bunch of great side events including a £20k guarantee Mini Main. British pro Tom Middleton won last year’s GUKPT Blackpool after a three-way chop with Tom Hall and Richard Kellett, awarding him the title and £56,255 payday. There were 251 entries creating a prize pool of €251,000. The GUKPT Blackpool festival, one of the highlights of the UK live events circuit, is held at Grosvenor Casino Blackpool right on the city’s famous seafront.

The GUKPT Grand Final London starts November 19 at the Poker Room above the iconic Grosvenor Victoria Casino in Edgware Road. Now celebrating its 11th season, the GUKPT is the longest running poker tour in the UK, welcoming poker enthusiasts from all across the country for a packed week of fun poker action.