The EPT is back! 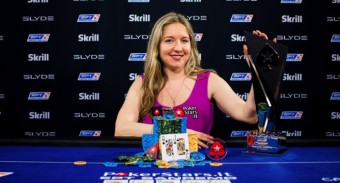 PokerStars has announced the return of the popular European Poker Tour, with its first stop in 2018 taking place in Sochi, Russia in March.

The EPT was founded by John Duthie in 2004 and ran for 13 seasons with 115 events in 18 different countries. The tour paid out some €620 million in tournament prize pools and created dozens of millionaires – as well as scores of world-famous players. As well as Sochi, other 2018 EPT stops already on the schedule include EPT Monte Carlo in April and EPT Barcelona in August.

Vicky Coren-Mitchell was the EPT's only two-time champion; she won in London for £500,000 in 2006 and then in Sanremo, Italy in 2014 for €476,100. The biggest single prize in mainland Europe was won by Dutch player Pieter de Korver who took down EPT Grand Final in Monte Carlo for €2.3 million.

The return of the EPT was announced during PokerStars Championship Prague which is taking place right now in the Czech capital. As well as the EPT, the Latin American Poker Tour is also being reintroduced with a first stop in Chile in March 2018 and the Asia Pacific Poker Tour which will be back with the Macau Cup at City of Dreams in February.

MainEventTravel CEO Fraser MacIntyre was one of the many to taste success on the EPT; he was runner-up at EPT Madrid in 2012 for €290,000, his biggest ever live cash to date.

Mad Harper, who was Media Coordinator for the EPT for almost its entire run, said: “Like a lot of people, I’m absolutely thrilled that the EPT is coming back. The EPT stood for so many things, not least of which was friendships going back more than a decade and just hundreds of memories from amazing events all over the world.

“Right from the very beginning – in Barcelona in 2004 – the EPT felt like a family. It was more than just a tour and I’m not saying that just because I’m very sentimental! Lots of people felt like that – players, media, camera crews and all the people who worked behind the scenes at PokerStars. I was lucky to be in at the very start but had no idea then that the EPT would prove such an amazing journey for so many people. Of course, it all kept going under the PokerStars Championship banner but the EPT name meant a lot, and now it’s back!”