The late British poker legend David “Devilfish” Ulliott and American pro Phil Ivey have just been inducted in to the Poker Hall of Fame after being nominated by the public and voted in by media and existing Hall of Famers. 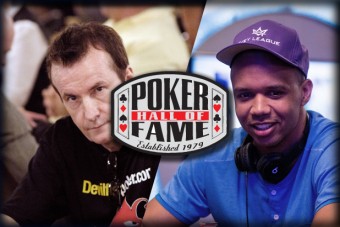 Ulliott, who passed away from cancer in April, 2015, received the poker world’s ultimate recognition for his role in growing the game in England.  Hailing from the Yorkshire city of Hull, Ulliott was a regular on the hugely popular Late Night Poker; the show was instrumental in boosting the game’s popularity. Known as “Devilfish”, Ulliott was a true character who captivated audiences and kept them tuning in.  He won a WSOP gold bracelet at the 1997 World Series of Poker and was a fixture at poker tournaments for more than two decades.

The Ulliott family said: “We would like to thank the general public, media and current Poker Hall of Fame members that voted David into the Poker Hall of Fame.  We know he will be up there strumming on his guitar and probably asking what took so long! How he might say it - I think you all know! There isn't a day that goes past when we don’t think of him and miss him but today we are so proud and delighted that he takes his rightful place in poker history - the legend of the Devilfish lives on!

“We know he would be happy about the progress of John Hesp in the Main Event, a regular at Napoleon’s in Hull, David’s home city in the UK.  John represents what poker is all about - a true game of the people. We welcome Kings Casino’s offer to commemorate David’s induction into the Poker Hall of Fame at the WSOP Europe in October.  Just remember, as the Devilfish would say – ‘Life is a blast. It doesn’t last. Live it long and live it fast’.”

Ivey is well known throughout the world and sits fifth all on the all-time live money list with $23,856,034 in live tournament winnings, and this does not take into account any of his online poker or cash game play.  Ivey is the youngest player in WSOP history to amass 10 victories, and just this year turned the required minimum age of 40 to be considered for Poker Hall of Fame induction.

“I want to thank the living members of the Poker Hall of Fame as well as the media who voted for me to be part of the Poker Hall of Fame,” said Ivey.  “It’s an honor to be inducted alongside legends like Chip Reese and Doyle Brunson.  I love the game of poker and the game has done a lot for me.  I am one of the lucky people who has been able to make a living playing a game which was always my passion. Thankfully, I’m just as passionate about the game today as when I first stepped into Binion’s Horseshoe to play my first-ever WSOP.”