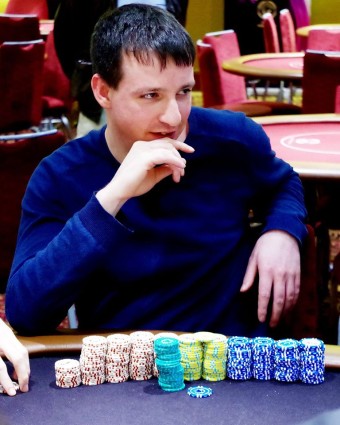 British player Daniel Charlton is leading for the final day of the £1,100 GUKPT Manchester Main Event. Charlston, who studied Astrophysics at Liverpool University, has 706,500, ahead of Tuan Le on 683,500.

There is a live stream from 12.30pm on GUKPT’s live page. Look out for the all-in triangles, sponsored by MainEventTravel.com and making their debut at this year’s GUKPT Manchester.

Day 2 started with a bang, with 40 players eliminated in the first two levels. With 26 players finishing in the money, the bubble lasted only a few hands before Sanjay Patel lost a race to GUKPT Passport winner Andy “LogJam” Hills.

The day ended in drama too with Peter Hytner winning a massive four-way all-in with pocket Aces. With the MainEvenTravel.com all-in triangle at the heart of the action, the hand was so exciting that even the cash game players dashed over to come and watch. Joe McKeown survived but Anward Kanj finished in 22nd place and Adam Hilton finished in 21st; both players took home £2,400. Steve Warburton bust in 24th place and two-time GUKPT winner Ben Winsor in  25th. Among those who will be back for the final day today are Andrew Christoforou, Stuart McNally, Andy "LogJam" Hills and Daniel O’Callaghan.

The GUKPT Manchester Main Event came with a monster £200,000 guarantee but easily surpassed that.