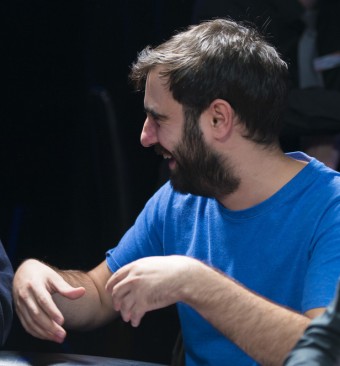 Congrats to Spanish player Lucas Blanco who has won the first Devilfish Cup tournament at Dusk Till Dawn for £250,000. It was a career-best live cash for the Spaniard who also finished sixth in the WSOP Little One for One Drop last July and won a €1k NL Turbo side event at EPT Malta last month. Also in the money were our very own MainEventTravel ambassador Simon Deadman, Ben Heath, Manig Loeser and Barny Boatman. Blanco also received a special guitar signed by Queen lead guitarist Brian May. You can watch the final table action here: http://www.dusktilldawncasinonottingham.com/live-updates/wpt-uk/devilfish-cup/#live-updates.

There were 161 entries with the top 20 getting a share of the £1,020,000 prize pool. Among those who competed were tennis legend and three-time Wimbledon champion Boris Becker and the UK’s #1 tournament player Sam Trickett.

The £5,300 buy-in event included a £300 donation which will be added to 3% of the prize pool and split between the Marie Curie charity and a trust fund for Ulliott’s daughter Lucy. The £2,200 Main Event starts today. Last season’s partypoker WPT UK Main Event attracted a field of 450 entries with Iaron Lightbourne beating Craig McCorkell heads-up to win the title and £200,000.