The eagerly-awaited GUKPT Manchester event kicks off next Sunday with an eight-day festival at Grosvenor Casino Manchester. The £1,100 buy-in Main Event, which starts March 2, carries a monster £200,000 guarantee. The £220 Mini Main Event runs February 26-28 with a £20,000 guarantee. 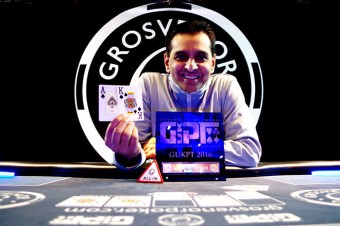 Last year Reyaaz Mulla took the Main Event down, winning a career-best £58,300. He cut a heads-up deal with EPT Barcelona champion Tom Middleton before seizing victory and the GUKPT trophy. There were 232 players last year creating a £232,000 prize pool.

2017 is the GUKPT’s 11th consecutive season and promises to provide another record breaking year with a packed schedule and £1.8 million in Main and Mini Main guarantees. There will be nine legs in total this year before the GUKPT Grand Final takes place at the Vic in London in November.

Michael Zhang won the debut GUKPT of 2017 tour earlier this month for a staggering £113,000. The GUKPT London Main Event was the biggest in the tour’s history and has set a high standard for the rest of the year after attracting a whopping 435 entries.