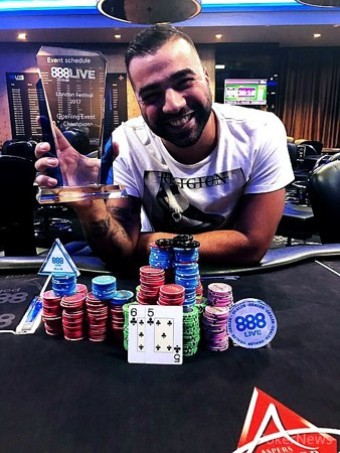 The 888Live London Festival is well underway with Britain's Christopher Kyriacou winning the Opening Event for a career-best cash of £26,000. All nine finalists won a £1,100 seat to the Main Event in addition to their prizes. There were 771 entries in total resulting in a guarantee-busting prize pool of £142,758.

MainEventTravel.com has literally dozens of hotel options for the 888Live London Festival – ranging from luxury hotels just a stone’s throw from Aspers through to budget hotels, apartments and hostels in and around the city. If players want to spend more than they are allocated by 888 – to upgrade their hotel or extend their stay in London, they can simply top up their MainEventTravel account to pay for it. Alternatively, they can opt for budget accommodation and save credit on their MET account for future trips to 888Live events.

Fab MainEventTravel service for qualifiers
Our partnership with 888Live gives 888poker’s online qualifiers a great way of sorting out their travel. Instead of the traditional methods used by most sites, MET enables event qualifiers to fully customize their travel options to get the maximum value from their packages. Each qualifier gets an 88poker credit on their MainEventTravel account and can choose exactly how they would like to spend it from the wide range of hotels available on the MET site. You can choose the exact dates of your stay – to ensure there are no wasted nights – and you can also top up your MET account credit if you want to upgrade your accommodation or extend your stay. You can also take advantage of any budget options available, thus leaving you with credit on you MET account to extend your stay without increasing spending, or perhaps put the funds towards a future leg of the tour.

Last year’s 888Live London
At the first 888Live Make It Big festival at Aspers Casino in London, 21-year-old Hong Kong-born Ka Him Li won the £880 Main Event after cutting a heads-up deal with Shah Raza. Li won £45,300 and his first trophy. Among the 36 players to cash were 888poker Ambassador Kara Scott, Michael Mizrachi and Leo McLean. There were 288 entries in total, creating a £228,096 prize pool. Meanwhile, French player Eric Le Goff triumphed over Tom Middleton in the High Roller for £30,000. Since that first London event, 888Live’s guarantees and player numbers have steadily increased.