Cash Game Festival London drew to a close early this morning after five days of non-stop, action-packed poker at Aspers Casino in Stratford, London. Beers were flowing from early on yesterday and by the evening, there were 23 full tables in action – a record for the Festival so far this year. Even at 2am, there were 19 cash games still in operation. 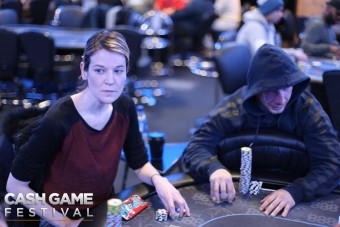 Among the well-known names taking part were French EPT Grand Final runner-up Lucille Cailly and British pro Sin Melin. Cailly studied epistemology (the study of knowledge) at the famous Sorbonne University in Paris, and is also a writer and most recently a stand-up comedian who performed at Edinburgh Festival last summer. Her live tournament earnings total more than $1.5 million.

The Twitch live stream aired daily from 5.30pm with David Clarkson the biggest of all feature table winners.

The next Cash Game Festival is coming up soon with a five-day extravaganza from March 8 -12  in Nova Gorica, Slovenia. Perla Casino is hosting the event and many London-based players – including Sin Melin – have already confirmed their attendance. The nearest airport is Trieste airport, just 15 minutes’ drive from the Casino – and Main Event Travel is the Festiva’s Official Travel Partner making it easy as pie to arrange your hotel booking. At the end of April, Cash Game Festival is heading back home with a five-day event in Tallinn, the beautiful capital of Estonia.