Don’t worry if you’ve missed the fun in Sochi! Let MainEventTravel help you with your trip to the partypoker MILLIONS at Dusk Till Dawn in Nottingham from April 18-23. And if you want to visit amazing Sochi, there’s the PokerStars Championship Sochi from May 20-31 which is also being held at the spanking new and ultra-glamorous Sochi Casino and Resort. 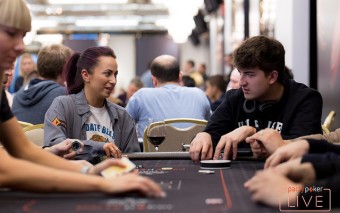 The partypoker LIVE Million event is the biggest live poker tournament ever held in Russia  and has attracted top players from all over the world including sponsored pro Natalia Breviglieri (still in with 441,000!) and Polish wunderkind Dzmitry Urbanovich (out, but coming back later for Open Face Pineapple and HORSE events).

Also on the schedule today is a Win the Button Turbo at 9pm, with more side events tomorrow in the form of an Open Face Pineapple tourney and HORSE event.

Sochi hosted the Winter Olympics and has long been a popular holiday destination in Russia but the new Sochi Casino and Resort is a unique departure in Russian tourism and aims to match the very best casinos in Las Vegas. partypoker is the first global poker operator to host a major live poker event there but PokersStars will be following it up with PokerStars Championship Sochi from May 20-31.