Brits are bossing the WSOP! 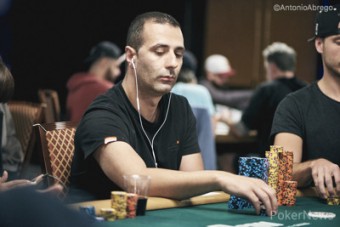 Britain’s Lawrence Bayley led the WSOP Main Event at the end of Day 2ab and now it’s fellow Brit Artan Dedusha in the lead with 680,000. Dedusha is competing in his very first WSOP Main Event and had an eventful Day 2c. He cracked kings when his pocket fives flopped a set, and cracked aces when he flopped two pair.

All Day 2c survivors will be back later today to join the 1,100 players who made it through 2ab yesterday.

Dedusha, who has $118,186 in live tournament winnings to date, has achieved most of his cashes in the UK. He is clearly on a roll; he scored his biggest cash ever a month ago when he took down the Grosvenor 25/25 Series in London for £25,241 and in April he was third in the PokerStars Cup in Monte Carlo for €18,832.

Other WSOP stories: Marc Convey and his quad kings; Debs the Destroyer runner-up in Ladies Championship; all WSOP stories.