Main Event Travel has a fantastic offer for stays on board the 5 star Sunborn Super Yacht Hotel, Resort and Casino for the forthcoming Super Stack Gibraltar. Rooms will start from just £155, a great opportunity to live the high life at bargain prices! 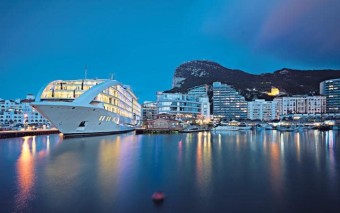 The Daily Telegraph describes the Sunborn Super Yacht as: “a buzzing complex of shops, bars and restaurants a five-minute taxi ride from the airport, Sunborn is an enterprising blend of comfort, tasteful nautical styling and commercial pragmatism.”

Super Stack Gibraltar runs August 24-28 on board the Sunborn Super Yacht with a low buy-in of just £150 + £20. Players get a 30,000 Super Stack with one buy-in and four re-entries permissible per Day 1. There are four start flights giving even those pressed for time the chance to compete on the Rock! As well as Day 1a on Thursday evening and 1b on Friday, there’s also a 1c flight starting 4pm on Saturday evening local time (with late reg open until 7.30pm) and a 1d Turbo at 10.30pm on Saturday evening for very late arrivals.

The final day starts Sunday at 2pm. Following the fantastic Super Stack structure, players get a 30,000 stack with 30 minute blind levels. Four re-entries are permissible per Day 1 with a 3.5 hour late reg and re-entry period available for each start flight.

All Super Stack destinations are easy and cheap to get to. There are numerous return flights from the UK to Spanish resorts enabling Super Stack players the chance to compete in great locations at an affordable cost. MainEventTravel is Super Stack’s Official Travel partner and can arrange fantastic hotel deals for all the events.