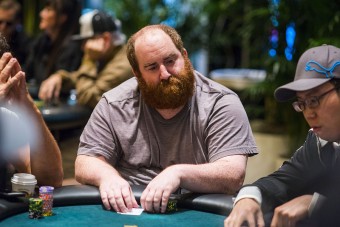 The field started to tighten up well in advance of the money bubble last night, and from 55 players, progress advanced slowly to the 44 players that would make the money. However there wasn’t a single hand of hand-for-hand play to burst the money bubble with Dani Dayan the unfortunate bubble boy. After the bubble burst, the pace picked up once again and the final 27 players were reached around 2 a.m. ET.